A heterogeneous mixture is simply any mixture that is not uniform in composition — it's a non-uniform mixture of smaller constituent parts. By contrast, a mixture that is uniform in composition is a homogenous mixture. For the purposes of this discussion, “not uniform” means anything that clearly has different parts visible to the naked eye or that could be easily separated from each other. You can find many examples of heterogeneous mixtures in solid, liquid and gaseous form throughout nature. 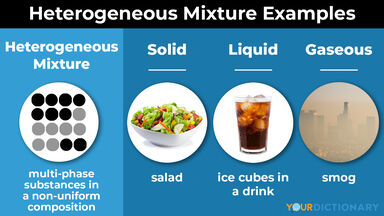 When a mixture contains multiple distinct components, but the whole mixture acts like a liquid, that is a liquid heterogeneous mixture. Here are some examples:

Some heterogeneous mixtures are primarily gaseous. Gaseous mixtures may contain liquids or even solids, but as a whole, they act like a gas.

Most heterogeneous mixtures contain multiple parts in multiple phases, but they usually behave on the whole as if they belong to one particular phase of matter:

There are other phases of matter, including plasma and Bose-Einstein condensates, but they’re beyond the scope of this article.

The Science of Mixtures

Homogeneous and heterogeneous mixtures are just the simplest, most straightforward way mixtures are defined in science. Things get more interesting as they get more specific.

All these mixtures are a part of daily life. Examples can be found in your kitchen, your car and your own human body. Understanding what mixtures are and how science defines them is an important part of learning how the world works. When you’re prepared to perform some scientific experiments of your own, be sure to follow the scientific method. It’s the official process for testing hypotheses!