A chemical mixture combines two substances that maintain their own properties when combined. Heterogeneous mixtures are made up of a non-uniform composition, while homogeneous mixtures are made up of a uniform composition. For example, water and sand is a heterogeneous mixture — you can easily separate the sand from the water. But orange juice is homogenous — it would be difficult, if not impossible, to separate the orange particles from the water. Keep reading for more examples of solid, liquid and gaseous homogenous mixtures that you see every day. 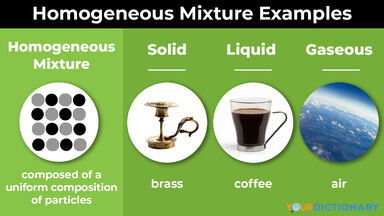 You may be wondering if certain types of stone, such as granite, are homogeneous. Rocks are made out of different minerals, crystals and substances, making them heterogeneous. However, the minerals that compose rocks are often homogeneous themselves.

Many of the liquids you encounter every day are examples of homogeneous mixtures. These liquids include the beverages you drink, your bodily fluids and household cleaning materials.

Some people argue that homogenized milk — milk that has been treated by a machine to ensure that fat molecules are consistent throughout the liquid — is homogenous. While the substances (fat and water) will not separate in homogenized milk, it is technically a colloid. The fat is suspended rather than dissolved; therefore, milk is a heterogeneous liquid suspension of fats in water.

When the air around you contains droplets of moisture (such as in fog or mist), it's considered heterogeneous. The same goes for when you sneeze or spray perfume into the air.

Another key component of homogenous mixtures vs. heterogeneous mixtures is what phase each substance is in. For example:

It's possible for a mixture to start out as heterogeneous and then become homogeneous as one substance dissolves. An example would be adding sugar to water; the sugar crystals are solids, but when they dissolve, the sugar is in liquid form.