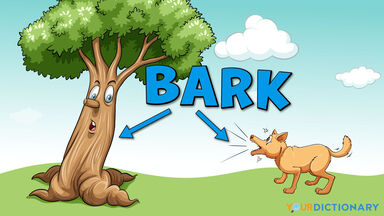 A simple example of a homonym is the word pen. This can mean both "a holding area for animals" and "a writing instrument." Another example is book, which can mean "something to read" or "the act of making a reservation." In both cases, the sound and spelling are the same; only the definition changes. Discover a collection of 30 more homonym examples.

Note that some homonyms have more than two meanings (for example, "tender" can also mean sensitive, easily chewed, or even refer to chicken strips), but to keep things simple, the homonyms examples list includes only two for each word.

Thanks to their identical prefixes, the words homophone, homograph and homonym are often confused. However, in this case, it's the suffix that makes all the difference.

The all-important suffix of the word homophone is -phone, which means "sound." Homophones are words that sound the same when spoken, but have different meanings and are spelled differently. For example, consider the words "heal" and "heel." Heal refers to recovering from an illness, while heel refers to the bottom back portion of someone's foot. Other homophone examples include:

Homographs are words that are spelled the same, as indicated by the suffix -graph, which means "writing." Homographs have the same spelling but different meanings and different pronunciations. For example, consider the word tear. Tear (tir) refers to a drop of water falling from someone's eye. Tear (tār) means to rip something. Either way, the spelling is the same, but not the meaning or the sound. Other examples of homographs include:

Homonyms have characteristics of both homophones and homographs. As mentioned, they are words that are spelled alike (like homographs) and sound the same (akin homophones). Homonyms are a special case, and they are best thought of as the center portion of a Venn diagram that shows the overlap between homophones in one half and homographs in the other. A few more examples of homonyms include:

Infographic: Homonyms vs. Antonyms and Synonyms

It's also important to know how homonyms relate to other aspects of the English language. For example, homonyms do not share the same meaning, so they are not synonyms for one another. However, they are also not antonyms. They do not have opposite meanings, but rather have different meanings that are unrelated. The infographic below illustrates how homophones and homonyms relate to antonyms and synonyms.

While homophones are likely to get you in trouble when it comes to spelling — as anyone who's ever mixed up "accept" and "except" can attest — homonyms are more of an issue when you're quickly skimming something.

For example, if you aren't paying attention to context clues, reading a story about a king who wants air can be confusing for a moment. Is he in danger of suffocating, or is he asking a minstrel to sing a song? Fortunately, context clues clear up any confusion for most readers within moments, and comprehension is not an issue.

Homonyms can be more confusing for young readers or people learning English as a second language, usually because they aren't yet familiar with alternate definitions of a word, but our list of common homonyms will help you learn the differences.

Overcome the Trouble With Homonyms

The bottom line about homonyms? If you ever come across a word that just doesn't seem to make sense in its context, check for alternate definitions. You just may have a homonym on your hands. You'll feel much more confident in your language arts skills when you learn the secondary meaning of one of these tricky quirks of the English language. Next, turn your attention to another challenging aspect of the language by getting familiar with some of the most often mispronounced English words.