Homozygous refers to the state or condition that occurs when an individual inherits the same DNA sequence for a certain gene from both biological parents. When a particular gene has identical alleles (versions) of chromosomes inherited from both parents, the gene is homozygous. A homozygous trait is referred to by two capital letters (XX) for a dominant trait, and two lowercase letters (xx) for a recessive trait. 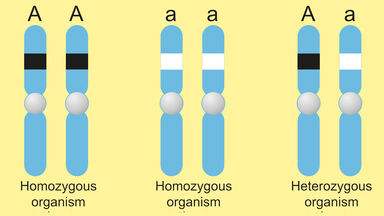 Effects and Examples of Homozygous Genes

Biological parents pass on versions of genes to their children. These versions are referred to as alleles. When the alleles are identical, the gene is said to be homozygous. This can lead to a person exhibiting homozygous traits. There are many examples of homozygous genes.

Homozygous genes can impact the appearance of a person’s eyes as well as medical conditions related to the eyes.

Homozygous genes can manifest in certain factors that impact a person’s appearance, including hair and skin.

Homozygous genes can predispose a person to develop or have immunity to certain medical conditions.

Homozygous genes can impact a person’s musculoskeletal system, impacting factors related to their movement and appearance.

While the basic homozygous definition simply describes the word as being a descriptive term for a cell that has two identical copies of a gene, the scientific definition is a bit more complex:

In order to interpret the scientific definition, a person will need to know the meaning of some other key scientific terms.

Expand Your Knowledge of Genetics