Humor is something that is funny, comical, or amusing. There are many types of humor, and what appears humorous to one person may not be humorous to another. Humor can be found in movies and books, in jokes, and in everyday situations of life. Humor can also describe a mood or a state of mind, as when saying that a person is in a state of good humor. Because laughter is good for us, humor can play an important role in our health. 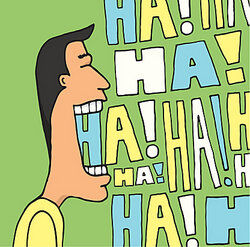 Man laughing as examples of humor

Below are some examples of humor:

These are all jokes that people have found to be examples of humor.