Different hydrolysis examples are found all over the globe. Soap is a great one. Explore more hydrolysis reaction examples and get a clear definition of what hydrolysis is. 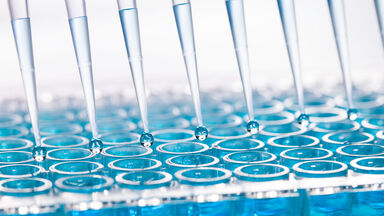 Since hydrolysis includes hydro, you can guess that it has something to do with water. In fact, hydrolysis comes from the Greek words for water and separation. In simple terms, hydrolysis is the process by which chemical compounds are broken apart by the addition of water.

Are you looking for an example of hydrolysis in action? Acetic acid is created through hydrolysis. But it’s not the only one, explore several hydrolysis reaction examples.

Sodium acetate is a type of salt. When water is added to sodium acetate, the chemical bonds break down, causing it to separate into sodium ions and acetate ions. Then acetate ions in the water combine with hydrogen atoms to create an acid called acetic acid.

Alkyl halides are chemical compounds often used in refrigerants as CFCs (chlorofluorocarbons). When water is added to alkyl halides, the chemical is converted to a type of alcohol that is generally safer for the environment.

Adding water to ester, a compound used in everything from explosives to polyester flooring and perfumes, results in the ester turning into carboxylic acid and alcohol due to the process of hydrolysis.

Sucrose is a disaccharide also known as table sugar. Hydrolysis of this compound results in the creation of two separate monosaccharide sugars known as glucose and fructose. These sugars are used in a variety of applications, widely in the food industry.

Hydrolysis of cellulose, an organic compound used to make all sorts of things from paper to biofuels, results in a split in the chemical bonds between cellobiose and cellulose. The cellobiose can then be further hydrolyzed to create glucose.

Epoxide is a chemical compound that can make epoxies (for example, adhesives and various types of resins). When hydrolysis is applied to this compound, the chemical bonds weaken to produce diol, a compound containing two hydroxyl groups. Among the commonest diols in nature are sugars and cellulose.

An amide is a particular type of compound that, when hydrolysis is applied, will break down into carboxylic acid (a kind of acid that gives vinegar its characteristically sour flavor) and amines (such as amino acids).

Hydrolysis of carbamates, which are widely used by manufacturers to make products such as polyurethanes and certain types of insecticides, results in the creation of alcohol plus amines.

The process of hydrolysis, when applied to the chemical compound nitrile, will result in the creation of carboxylic acid and ammonia. This reaction happens in two stages.

Hydrolysis can result in the synthesis of helpful chemicals. Sulfonylureas and organophosphate esters can be hydrolyzed into specific types of insect killers and pesticides.

Triglycerides are composed of ethers and several different types of fatty acids. These are the main ingredients, for example, in lard and vegetable oil. When hydrolysis is applied to a triglyceride, it breaks down into glycerol and fatty acids.

The digestion of food is an example of hydrolysis. The water helps to break down the compounds you have eaten. This allows the larger compounds to be broken down into smaller compounds, so they are more easily absorbed.

Soap is one product created by hydrolysis. When a triglyceride or a fat is hydrolyzed, glycerin is produced as are fatty acids. The glycerin then reacts with those fatty acids to turn them into a specific salt commonly known as soap.