Examples of Hyperbole for Kids

Have you ever said you've done something a million times? While you probably haven't done it a million times, you did use hyperbole. Get a clear definition of hyperbole and different hyperbole examples for kids. 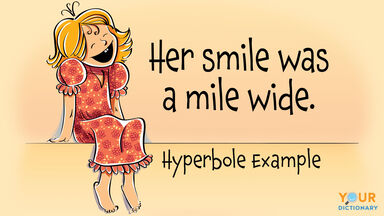 Hyperbole is an exaggeration used for emphasis or humor. This literary tool is often used to make a certain element of a story seem more interesting. To say you were bored to tears (even when you were never on the verge of crying) packs a bit more of a punch than, "I was bored."

This literary tool isn't meant to be taken literally because, while lying isn't encouraged, stretching the truth is the name of the game. Let's have some fun with entertaining examples of hyperbole for kids that'll acquaint them with a new element of fiction and hopefully spark a lifelong friendship.

Size works great for hyperbole because it's easy to make something larger than life. See a few fun, kid-friendly examples of hyperbole the whole family can enjoy.

Hyperbole is all about drama. It is an exaggeration, after all. See some fun uses of hyperbole to express desperation.

Kids generally have a hard time fully understanding amounts and money. Therefore, amounts are typically exaggerated. See how this works through a few examples.

Time gets exaggerated a lot with hyperbole. See a few excellent examples of hyperbole for kids.

Kids see advertisements all the time, and many contain hyperboles. Explore some examples of hyperboles in advertising.

Now that the kids are hooked on hyperbole, we hope you'll continue the fun with more examples of hyperbole. And, when the time's right, why not expand their horizons into personification or alliteration? These figure of speech examples provides a nice starting point for all the fictional fun you're about to ensconce them in.