Examples of Hyperbole in Literature

Hyperbole is used in language every day. So, it makes sense that it's a device writers use to make literature interesting. See hyperbole examples in literature from some of the greats like Shakespeare and Harper Lee. 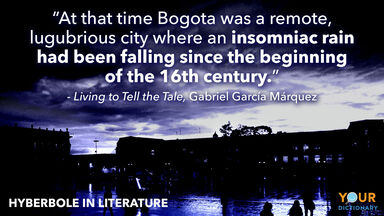 Hyperbole is the use of over-exaggeration to emphasize a point or to be humorous. It is not intended to be taken literally. Any writing tool that adds emphasis is going to lend itself particularly well to literature. What better way to paint a striking, vivid picture than some good old-fashioned exaggeration?

If you want to give some life to the point you're trying to make and bring an idea home for your readers, hyperbole can help. With a nod to some of the great literary masters, look at some examples of hyperbole in literature.

These examples of hyperbole in literature show this literary tool being used to great, expressive effect.

Parker's Back by Flannery O'Connor

The exaggeration in Parker's Back by Flannery O'Connor helps to set up the characterization.

"The skin on her face was as thin and drawn as tight as the skin of onion and her eyes were gray and sharp like the points of two picks."

To Kill a Mocking Bird by Harper Lee

In To Kill a Mockingbird, Harper Lee uses hyperbole to emphasize the slow, dull pace of life in the town.

"A day was twenty-four hours long but seemed longer. There was no hurry, for there was nowhere to go, nothing to buy and no money to buy it with, nothing to see outside the boundaries of Maycomb County."

A great example of hyperbole in literature comes from the narrator's opening remarks in the American folktale Babe the Blue Ox. It comically gets across just how cold it was.

"Well now, one winter it was so cold that all the geese flew backward and all the fish moved south and even the snow turned blue. Late at night, it got so frigid that all spoken words froze solid afore they could be heard. People had to wait until sunup to find out what folks were talking about the night before."

The People, Yes by Carl Sandburg

"The People, Yes" is a poem by Carl Sandburg, whose funny quips are often called Sandburgers. As in To Kill a Mockingbird, Sandburg uses a hyperbolic line to emphasize a slow pace of life.

"It's a slow burg-I spent a couple of weeks there one day."

Living to Tell the Tale by Gabriel García Márquez

Gabriel García Márquez, one of the most celebrated authors of the 20th century, used hyperbole to inject some sharp humor into a memorable description in Living to Tell the Tale.

"At that time Bogota was a remote, lugubrious city where an insomniac rain had been falling since the beginning of the 16th century."

Banner in the Sky by James Ramsey Ullman

In this example from Banner in the Sky, James Ramsey Ullman shows how dynamic contrast can heighten emotion.

"It was not a mere man he was holding, but a giant; or a block of granite. The pull was unendurable. The pain unendurable."

Revenge of the Pork Person by Dave Barry

Popular humorist and columnist Dave Barry paints a flamboyant picture with this silly, entertaining hyperbole in "Revenge of the Pork Person."

"A man can have a belly you could house commercial aircraft in and a grand total of eight greasy strands of hair, which he grows real long and combs across the top of his head so that he looks, when viewed from above, like an egg in the grasp of a giant spider, plus this man can have B.O. to the point where he interferes with radio transmissions, and he will still be convinced that, in terms of attractiveness, he is borderline Don Johnson."

Old Times on the Mississippi by Mark Twain

Old Times on the Mississippi by Mark Twain contains an example of hyperbole to dramatize a feeling of helplessness.

"I was helpless. I did not know what in the world to do. I was quaking from head to foot, and could have hung my hat on my eyes, they stuck out so far."

"Why does a boy who's fast as a jet take all day and sometimes two to get to school?"

When you think of hyperbole in literature, think no further than William Shakespeare in Romeo and Juliet. See Romeo's words in Act II for a perfect example.

"The brightness of her cheek would shame those stars.
As daylight doth a lamp. Her eye in heaven
Would through the airy region stream so bright
That birds would sing and think it were not night."

Another great Shakespeare example of hyperbole is found in Hamlet when Hamlet describes his uncle. He uses hyperbole to exaggerate how terrible his uncle is.

"A murderer and a villain,
A slave that is not twentieth part the tithe
Of your precedent lord."

Another famous literary hyperbole example can be found through Gatsby's description of Daisy's voice in The Great Gatsby.

“"She’s got an indiscreet voice,' I remarked. 'It’s full of—' I hesitated.
'Her voice is full of money,' said suddenly.
That was it. I’d never understood before. It was full of money—that was the inexhaustible charm that rose and fell in it, the jingle of it, the cymbals’ song of it."

Get Creative with Hyperbole

Hyperbole and literature — the two just go hand-in-hand. But, don't think the fun stops in fiction writing. It's also used in everyday life, advertising, speeches, songs, and movies. Take a look at examples of hyperbole to see it used in different ways. And it's never too early to bring on the giggles or get dramatic with the kiddos, so start them young by sharing examples of hyperbole for kids.