22 Examples of Ice Breakers for Groups Large and Small

When you have a group of people meeting for the first time, it is natural for participants of the group to feel out-of-place or nervous about how they will come across to others. Ice breakers are intended to help people get to know each other and become more comfortable with each other so they can communicate or work together better. Ice breakers can also be used any time two or more people meet and want to start a conversation or relationship. Discover ice breaker examples for groups of all sizes. 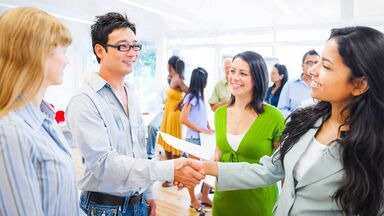 In a group, the purpose of ice breakers is to get everyone working together, talking and sharing. For large groups, it's important to consider time and logistics. The activities below can work well for large business meetings such as conferences or all-employee meetings or other big events, such as college or high school orientation sessions.

Challenge people to complete a scavenger hunt that requires connecting with others.

When getting to know new people, it's always good to have common ground to build on. With that in mind, consider having everyone in the group line up according to their birthdays, or have everyone line up alphabetically by first name or last name. Once participants get in order, have them introduce themselves to the people closest to them and share something fun related to the trait used on the game. For example, suggest they share a funny story about their name or their favorite birthday memory.

"People bingo" involves giving out cards with attributes or information in each bingo square. For example, one square might be "has brown eyes" and another might be "is an only child." You may want to use this printable people bingo template.

The idea behind mural mingle is to provide a way for people to meet each other and interact over common interests.

When people register for the event, ask them to share their favorite animal (or other topic). Include a small image of the animal each person listed on their name badge, being sure to include a symbol for those who didn't answer or who said "none" so that everyone is included. Use the animal images to assign people to network at different points in the day. For example, consider having everyone break into groups by favorite animal at the beginning of a session and give them a few minutes to share animal stories.

Trivia games can be a great ice breaker option that can be terrific for a large group if you use an app, such as the Kahoot! platform, that allows individual members to enter their answers via a smartphone, with the group's results projected out for all to see and share. This will work for large groups that are all together, as well as in a virtual setting regardless of group size. Just set up a game, enter some trivia questions appropriate for the group and let everyone know how to login.

When groups are relatively small (under 20 people or so), ice breakers can be more individualized. The activities below are great for new project teams, youth groups and other relatively small gatherings. They can also work with larger groups that have been separated into small groups.

Ask everyone in the group to go around in a circle and say their names and where they are from. Encourage everyone to give a general introduction, as well as three interesting facts about themselves they would like the group to know.

3 Truths and a Lie

For a bit of a twist to the ice breaker above, instead of having people share three interesting facts about themselves, instruct them to share three true facts and one that is made up. Then, when they introduce themselves, the rest of the group can vote on which of the four tidbits the person shares is the untruth. This is a lot of fun in person, but it's also a good virtual icebreaker that can be conducted via a collaboration tool or email.

Rather than having people introduce themselves, assign each person to an interviewing partner.

Consider playing a fun geography word game to get people talking and interacting.

Somewhat similar to the geography word game, the linking word game involves coming up with creative ways to link related words to each other.

Have prizes on hand for the last few remaining players. This is a great activity for kids, though grown-ups are also likely to enjoy it.

A group storytelling session can be a terrific ice breaker for a relatively small group. This involves having everyone create a story together, one line at a time.

Charades is a fun spoken word game that can be a really fun ice breaker for relatively small groups. It's a great way for people to get a sense of each other's personality and decision-making style in an entertaining and interactive way. Use an interesting charades word list and the group is sure to have a blast!

In some cases, you may want to break the ice when you are having a conversation one-on-one. When looking for ice breakers for these situations, it is best to ask opened-ended questions that give people a chance to share something about themselves. Everyone appreciates people who are good listeners and who want to listen to what they have to say.

Breaking the Ice to Build Relationships

Kicking off a group or team event with a successful icebreaker is a great way to start building relationships. Even people who already know each other can get to know each other better and in a different way by participating in activities like the ones listed here. For more ideas, consider incorporating some interpersonal communication quotes into the event you're planning.