Examples of Ice to Water Vapor

When ice turns directly into water vapor without first transitioning into a liquid, it is referred to as "sublimation." In fact, any solid that turns into a vapor without going through the liquid phase can be said to sublime or "sublimate." 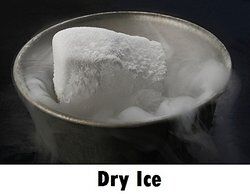 Other Types of Sublimation

A few materials other than ice experience sublimation as well. Here are some examples of other types of sublimation.