Iconography is the use of images and symbols to portray a subject, movement or ideal. It can also be the use of certain symbols that convey specific genres such as religious iconography, iconography in art and iconography in film and television. Discover a number of iconography examples related to religion, art, entertainment, and other aspects of life. 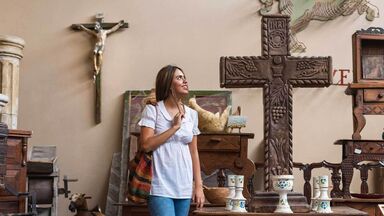 The phrase religious iconography refers to the use of imagery to convey religious concepts and ideas or to depict religious events. Individual pieces of religious art can be referred to as icons. Additionally, certain images are used within artwork related to religion to convey specific or symbolic meaning.

Examples of Iconography in Art

Examples of Iconography in Film and Television

Iconography is an important part of film and television shows, with certain visual images or symbols used to convey key information about the story, genre or timeframe. Iconography provides visual cues as to the genre, plot or theme.

Iconography can be found in many other contexts. Basically, any visual depiction that is used to convey cultural or historical context or symbolic meaning represents an example of iconography.

Iconography provides a shortcut way to communicate. Over time an icon can become an easy way to describe a large idea in a very abbreviated way. Now that you have a better understanding of what iconography is, expand your horizons by exploring the related concept of iconicity.