Examples of Ignorance Is Bliss

Ignorance, or a lack of knowledge, isn’t usually viewed as a good thing. However, there may be situations when you’re happier not knowing the truth. A common expression used to describe these situations is “Ignorance is bliss.” This phrase is an idiom, which is means that it isn't meant to be taken literally. Idioms can make a striking point but can’t be interpreted as actual fact. Take a closer look at a few examples of ignorance is bliss. 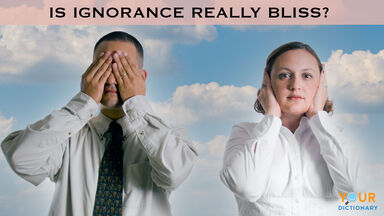 Origin of Ignorance Is Bliss

Eighteenth century English poet Thomas Gray wrote a beautiful poem in 1742 titled “Ode on a Distant Prospect of Eton College.” In it, he wrote:

“Where ignorance is bliss / ‘tis folly to be wise.”

You can see how this phrase isn’t meant to be taken literally. Gray was a poet, classical scholar and professor at Pembroke College in Cambridge. Surely, that’s not a man opposed to knowledge. Rather, he was waxing philosophical about a time when he was able to be ignorant — in his childhood. Surely, children know less than adults and are, therefore, allowed to enjoy their days without the proverbial “weight of the world” on their shoulders. So, while ignorance isn’t bliss exactly, it can make things seem lighter and more carefree.

Ignorance Is Bliss Meaning: Times When Ignorance Can Be Bliss

Can ignorance really be bliss? Or should the truth always prevail? In most circumstances, it’s better to have all the facts at your disposal. Yet, sometimes, it’s nice to live in a world free from the strains of reality, similar to an innocent child, for at least a little while. Thomas Gray would’ve never touted an ignorant world as a blissful one. It’s just nice to reminisce about the naiveté of childhood from time to time. To no surprise, Gray wasn’t the only one to employ idioms in his writing. Check out these famous examples of idioms in literature.