Examples of Imagery in Literature and Songs

What’s your favorite part about reading? Is it that you’re transported to foreign lands from your couch? Or, do you like meeting new people in the form of fictional characters? Either way, part of the magic of reading is the imagery that our favorite authors spark out of thin air. With the right words and the proper literary techniques, imagery can bring a story to life in readers' minds. It’s a kind of magic, really. Explore some examples of the different types of imagery in literature and songs. 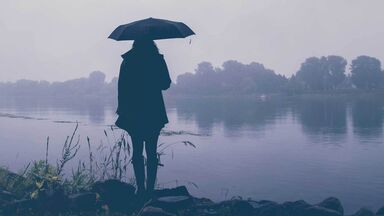 Masterful writers can draft an image on paper and set it before the reader in three-dimensional charm. All of a sudden, the reader is transported to a thatched-roof cottage with blazing embers crackling in the fire. Or, maybe the author depicts a futuristic world aboard a stainless steel alien aircraft. Writing is a true talent because it doesn’t require a big screen to promote an image. Some of the masters in literature have truly perfected the art of imagery.

Pip, the hero of Great Expectations by Charles Dickens, clearly paints a wet and soggy scene. Not only was he soaked down to the bone, but he had to struggle through the fog that made things invisible for a time.

"It was a rimy morning, and very damp. I had seen the damp lying on the outside of my little window … Now, I saw the damp lying on the bare hedges and spare grass … On every rail and gate, wet lay clammy; and the marsh-mist was so thick, that the wooden finger on the post directing people to our village — a direction which they never accepted, for they never came there — was invisible to me until I was quite close under it."

The visual imagery in this excerpt allows readers to picture themselves in the dreary setting Pip is describing. Through the use of the word "clammy," Dickens introduces tactile imagery that allows readers to feel the conditions in addition to being able to visualize them.

Charlotte's Web is a treasure trove of imagery. The way this book makes readers feel is why it has been a favorite among children and adults alike for so many decades.

"The barn was very large. It was very old. It smelled of hay and it smelled of manure. It smelled of the perspiration of tired horses and the wonderful sweet breath of patient cows. It often had a sort of peaceful smell­ as though nothing bad could happen ever again in the world. It smelled of grain and of harness dressing and of axle grease and of rubber boots and of new rope. And whenever the cat was given a fish head to eat, the barn would smell of fish. But mostly it smelled of hay, for there was always hay in the great loft up overhead. And there was always hay being pitched down to the cows and the horses and the sheep."

This excerpt highlights the author's masterful use of olfactory imagery, transporting readers to the inside of the barn by conveying the unique and ever-changing smells. The author's masterful description of smells paired with the use of visual imagery depicting barn life and activities combines to create a sense that this place is home; a safe haven from the outside world. This excerpt even uses synesthesia by relating "a peaceful smell" to a feeling of safety.

The Chocolate War by Robert Cornier

The Chocolate War is a beloved young adult novel by Robert Cornier reputed for its extensive use of imagery. The way the chocolates are described, they seem less than appetizing, right down to the purple ribbon. They’ve been stored under the best conditions since last spring? Yuck!

"… these are Mother's Day chocolates. … I was — able to pick them up at a bargain price. [They're] in perfect condition, … stored under the best of conditions since last spring. All we have to do is remove the purple ribbon that says Mother and we're in business."

In this excerpt, the author's words tell a very different story than what is conveyed, through gustatory imagery. While the words sound upbeat and positive, readers can almost taste the stale flavor of clearance chocolates purchased months ago and hidden away. Visual imagery allows readers to picture the removal of an out-of-date ribbon for a holiday that has long since passed, painting a picture that is more sad than hopeful, yet fully sensing and feeling how very earnest the character is.

Known as a powerful example of symbolism in literature, F. Scott Fitzgerald uses imagery throughout The Great Gatsby to transport readers to all of the empty excesses of the jazz age; the glitz, the glamour, the parties, but yet the yearning and, ultimately, the emptiness that still remained.

“Gatsby believed in the green light, the orgastic future that year by year recedes before us. It eluded us then, but that’s no matter — tomorrow we will run faster, stretch out our arms farther ... And then one fine morning —
So we beat on, boats against the current, borne back ceaselessly into the past.”

In this excerpt, the visual imagery of the green light lets readers visualize the future that's out there, almost within reach yet still out of touch. In a tactile way, readers can feel and visualize themselves running as Gatsby did, stretching out to grasp what cannot yet be grasped. Readers can feel the motion of a boat struggling against the current, moving slightly forward and back without ever truly getting ahead.

If you are a fan of music, then imagery surrounds you in songs. Many people agree that songs are but poetry set to music. If you think this statement is true, then it could be said the verses in your favorite songs are a good place to start when looking for samples of imagery in everyday works. Whether you like hip-hop, pop, rock and roll, country, or soul, music is as good a place as ever to find samples of imagery. Of course, don't forget to review examples of imagery in poetry as well.

Billy Joel's Goodnight Saigon provides an outstanding example of auditory imagery paired with other types of imagery. The song opens with the sound of helicopter blades in the very beginning. The lyrics include:

The initial sound of helicopters transports listeners through auditory imagery, while serving as foreshadowing for the later mention of "hum of the motors" and "counted the rotors." This excerpt also includes visual imagery in relating the danger of the situation to the image of a sharp knife. The song does an outstanding job using imagery to transport listeners into the danger and fear of wartime along with the powerful bond that soldiers can form on the battlefield.

Slow Dancing in a Burning Room by John Mayer

In Slow Dancing in a Burning Room, John Mayer croons about a relationship that’s about to die, using imagery to convey this point rather than overt statements. He sings:

Mayer's use of visual imagery makes it pretty easy to imagine a forlorn couple slow dancing in a room that’s about to engulf them in flames. Through the use of strong sensory words, there's even a bit of auditory and tactile imagery. The slow pace of the song allows them to almost hear the crackling of the fire and feel the heat of the flames. The imagery denotes a dying or doomed relationship. One would rarely stop to slow dance in a room that’s aflame. So, perhaps the loss of this love is enough to finish off the star-crossed lovers. Or maybe they feel such a strong pull toward each other that they can't move away from the danger, even though they can see, feel and hear the risk.

River by Eminem and Ed Sheeran

Love him or hate him, Eminem is another master lyricist. He released a single with talented songwriter Ed Sheeran titled River. It’s also about a severely flawed relationship. While Slow Dancing In a Burning Room created a slow, if not ominous, image, Eminem creates a frantic, if not crazed, image. One verse goes like this:

"Always the bridesmaid, never 'The bride, hey!'
What can I say? If life was a highway
And deceit was an enclave, I'd be swerving in five lanes
Speeds at a high rate, like I'm slidin' on ice, maybe
That's why I may have came at you sideways"

Swerving across a five-lane highway? Coming at someone sideways? Each of these lines creates a frenzied image. Surely, things are about to escalate, and not for the better. Listeners can feel the frenetic pace, visualizing stressful real-world scenarios to which they can relate. Readers can both see themselves in these situations as a result of the song's visual imagery and sense the out of control emotions the singer is describing in a visceral, tactile way.

Love Is Your Name by Steven Tyler

Did you know Steven Tyler crossed over into country in 2016? He wrote or co-wrote nearly every song on his album We’re All Somebody from Somewhere. Clearly, some woman got under his skin, judging by the imagery stirred up in these Love Is Your Name lyrics:

Rather than a house going up in flames or a crash across a five-lane highway, Tyler evokes tactile imagery through mentioning wind from heaven and the feeling of waking with the morning sun. Visualization is there as well, though dreaming until what one wishes for becomes reality. The tone of these words is deliberately happy and hopeful.

Imagery in a Single Sentence

Of course, imagery abounds in everyday life too. A friend might call and tell you about her romantic dinner in Manhattan last night. Your father might recall his major win at the poker tables in Vegas many years ago. While literature and music can paint a vivid picture, so can everyday life. Let’s take a look at various examples of imagery summed up in a single sentence, including several examples of similes.

Paint a Picture With Imagery

If you ever find yourself wondering where you can find good imagery examples, just turn on some music or pull out a book or magazine. Or, if you dream of writing a short story or novel someday, then imagery will be your truest friend. Enjoy these descriptive text examples for more inspiration!