Examples of Invective: Words and Prose

Invective is abusive or insulting language. Invective comes from the Latin word invectus, which translates as "attack with words." It can be a word or phrase that is meant to insult or degrade. As an adjective, the word invective can mean anything that contains abusive language, such as a letter or spoken words. 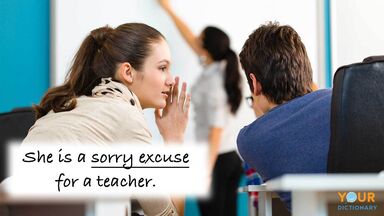 At the most basic level, invective is a verbal attack that uses disparaging language. It involves berating or striking out at another person using venomous derogatory language and name-calling. It can be described as hurling insults. While invective is often used in everyday communication, it is also a literary device.

Invective: A Noun and an Adjective

Invective can be used in multiple ways within sentences, including as a noun or an adjective.

Invective can be used as a noun. In this case, invective simply amounts to name-calling. It involves labeling a person, place, thing, concept, or idea with a derogatory or demeaning label.

Invective can also be used as an adjective. Using invective in this way involves adding venomous descriptive terms to enhance a noun.

When people use invective in real life or when characters infuse it into dialogue, they're usually driven by emotion. The rules of grammar and parts of speech aren't really what they're thinking about when using invective. When people speak in invective, they often use multiple parts of speech, as well as slang words and epithets. Invective often includes profanity and nonstandard language (such as "yo' momma" phrasing).

Examples of High Invective in Literature

This rather poetic example of high invective can be found in Shakespeare's King Lear.

"A knave, a rascal, an eater of broken meats; a base, proud, shallow, beggarly, three-suited, hundred-pound, filthy worsted-stocking knave; a lily-livered, action-taking, whoreson, glass-gazing, super-serviceable, finical rogue; one-trunk-inheriting slave; one that wouldst be a bawd in way of good service, and art nothing but the composition of a knave, beggar, coward, pander, and the son and heir to a mongrel bitch: one whom I will beat into clamorous whining if thou deni'st the least syllable of thy addition." (William Shakespeare, King Lear, II.2)

"I cannot but conclude the bulk of your natives to be the most pernicious race of little odious vermin that nature ever suffered to crawl upon the surface of the earth." (Jonathan Swift)

Examples of Low Invective in Literature

This example of low invective can be found in Edward Lear's 1859 Letter to Lady Strachey.

"A vile beastly rottenheaded foolbegotten brazenthroated pernicious piggish screaming, tearing, roaring, perplexing, splitmecrackle crashmecriggle insane ass of a woman is practicing howling below-stairs with a brute of a singingmaster so horribly, that my head is nearly off." (Edward Lear, "Letter to Lady Strachey")

The Philosophy of Furniture (Poe)

You can find an example of low invective In Edgar Allan Poe's The Philosophy of Furniture.

"In the internal decoration, if not in the external architecture of their residences, the English are supreme. The Italians have but little sentiment beyond marbles and colors. In France, meliora probant, deteriora sequuntur--the people are too much a race of gadabouts to maintain those household proprieties of which, indeed, they have a delicate appreciation, or, at least, the elements of a proper sense. The Chinese and most of the Eastern races have a warm but inappropriate fancy. The Scotch are poor decorists. The Dutch have, perhaps, an indeterminate idea that a curtain is not a cabbage. In Spain they are all curtains--a nation of hangmen. The Russians do not furnish. The Hottentots and Kickapoos are very well in their way. The Yankees alone are preposterous." (Edgar Allan Poe "The Philosophy of Furniture")

You can also find examples of invective in famous quotes.

Really, any kind of insult is an example of invective. While calling people names or generally being mean and nasty isn't the best way to communicate, there are times that it makes sense to work invective into your writing. You may also want to explore other ways characters can use language to put down others. After all, some characters do tend to say disparaging things quite regularly. Expand your repertoire by exploring some examples of cockney insults.