Irony occurs when what actually happens turns out to be completely different from what would be expected. In writing or speaking, irony involves using words so the intended meaning is the opposite of the literal meaning. The three major types of irony are: dramatic, situational and verbal, though there are also a few other kinds. Review some irony examples that illustrate each different type of irony. 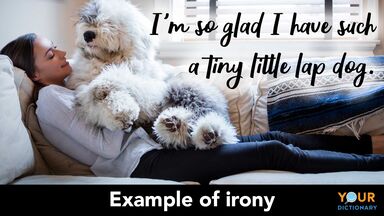 Dramatic irony heightens the audience's anticipation, hopes or fears. As readers wait to see when the main character will "catch on", suspense is building and the pages are turning. Review more dramatic irony examples for more situations that represent this kind of irony.

Situational irony occurs when something happens that is completely different from what was expected. Usually, these instances incorporate some type of contradiction and a certain level of surprise or shock.

Each of these situations involves a turn of events that is unexpected. Review more examples of situational irony for additional illustrations of this type of irony.

Verbal irony occurs when a character says one thing, but means another. In the examples below, the words that are used to convey verbal irony are marked in bold.

To further explore this type of irony, see examples of verbal irony. This type of irony is often confused with sarcasm, though they were not the same. Sarcasm involves a derogatory tone, with at least a bit of a mean-spirited dig rather than using words in an ironic (opposite) manner. Explore irony vs. sarcasm for more insight.

While dramatic, verbal and situational irony are considered the three main types of irony, they are not the only forms.

Socratic irony involves pretending to be ignorant on a topic and asking questions to someone as a way to get them to expose their own ignorance or flaws in reasoning. This technique is commonly used in satire.

This type of irony is related to the Socratic method used in teaching, though the goal of questioning students in education is to encourage them to engage in critical thinking rather than trying to expose a lack of knowledge.

Cosmic Irony can be attributed to misfortune associated with fate or chance. The outcomes don’t result from characters' actions, so it seems that an outside force has a hand in the situation.

This type of irony is often seen in situations that can be described as karma, in which a person is seen as getting their due (positive outcomes as a result of previous difficulties or negative outcomes related to previous negative actions).

Irony can be a wonderful literary tool to bring layers and texture to tales of tragedy, comedy or love. No one wants a story to be predictable and irony is anything but that. Especially if you are a fiction writer, don't be afraid to keep your readers guessing. When you use irony in your work, readers just may become so engaged that they’ll want to take additional journeys with you in your future. To get some ideas for further enhancing your writing, review more tips on how to engage the reader.