Its and It's: Correct Usage and Examples

In the case of its and it's, one pesky apostrophe is responsible for many spelling mistakes. Because both words sound the same, it doesn't matter when you're speaking — but the difference can be noticeable and confusing when you're writing. You only need an apostrophe in it's in certain situations; otherwise, you should use its. 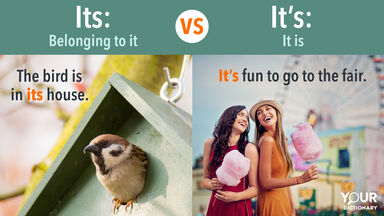 When to Use Its and It's

So when do you add the apostrophe, and when do you leave it out? It depends on the context of the sentence.

Its shows possession for the pronoun it. For example, a computer can update its drive, or a spider can repair its web. It's is a contraction meaning "it is" or "it has." In the sentence "It's going to be a fabulous night," it's is a contraction for "it is."

Examples of its in a sentence include:

It's: Contraction of It Is or It Has

How to Be Sure You're Right

One way to double-check yourself is to re-read the sentence and replace "it is" wherever you've placed its. For example, it doesn't make sense to say, "The bird is in 'it is' house." That's how you'll know to remove the apostrophe from an unneeded it's.

You know that plural possessive nouns have an apostrophe after the "s," so wouldn't you say its' instead of it's or its? The answer is no — its' is never a correct word. It is a singular pronoun, so there's no need to put the apostrophe after the "s." If you're looking for a plural form of its, choose their or theirs.

It's Its Time to Shine

The difference between its and it's starts to come naturally the more you use them. Now that you know when to use an apostrophe in it's, explore a few examples of when it's NOT correct to use an apostrophe. Dates and plural words are two of the largest areas of confusion. Until then, enjoy knowing you've mastered the its or it's debate!