Examples of Jim Crow Laws: What They Looked Like

"It shall be unlawful for a negro and white person to play together or in company with each other at any game of pool or billiards." This selection is an example of a Jim Crow law that was in effect in the state of Alabama from the late 19th century to the early 20th century. 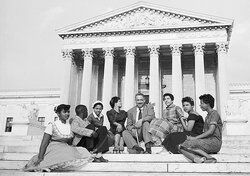 Jim Crow was the name of a minstrel character created in 1828 by Thomas Dartmouth ("Daddy") Rice. Rice’s comedy routines and the popular song “Jump, Jim Crow” established the common name for laws that enforced racial prejudice and denied human rights to black people in the United States.

Jim Crow laws started to come into effect, primarily but not exclusively in southern states, after the end of Reconstruction in 1877.

The legal principle of separate but equal was established in the Supreme Court case Plessy v. Ferguson in 1895. The Court’s decision was summarized by Chief Justice Henry Billings Brown, who stated that the 14th Amendment’s Equal Protection Clause “could not have been intended to abolish distinctions based upon color, or to enforce social, as distinguished from political equality, or a commingling of the two races upon terms unsatisfactory to either.”

That distinction of social, as opposed to strictly legal, discrimination, provided the foundation for states to keep black and white people separated, particularly in social settings and social institutions such as marriage. The convenient fiction of “separate but equal” was quickly abandoned and African Americans were treated as second-class citizens by institutions and laws that persist to this day.

These laws worked to enforce segregation amongst the races, which led to civil rights actions by individuals such as Ida B. Wells, and ultimately to the civil rights movement of the 1950s and 1960s led by people like Rosa Parks and Martin Luther King Jr..

Examples of Jim Crow laws that caused these extreme tensions in the country included the following.

“The business of America is business,” said President Calvin Coolidge, but in his own era and in the present, it has been the country’s business to enforce racial inequality. Buying, selling and the simplest activities of daily life - symbolized most famously by the simple water fountain - were firmly segregated by Jim Crow laws.

Marriage has always been a highly politicized issue. As one of the most fundamental institutions of society, when social change occurs, marriage changes with it. Examples of Jim Crow laws like the following were intended to freeze marriage into a perceived ideal where racial mixing was impossible:

Jim Crow laws required separate hospitals for whites and African Americans. What’s more, restrictions on education guaranteed a constant shortage of African American medical professionals. Many treatments were only available to white patients, and even blood transfusions were segregated by race, in spite of the fact that Charles R. Drew, one of the pioneers of American blood banks and a groundbreaking scientist in the field, was himself African American.

No single issue since the abolition of slavery has been the subject of more race-based conflict than education. Even after the 1964 Civil Rights Act banned segregated schooling, de facto segregation was maintained, both in and out of the Jim Crow South, through redistricting, redlining and covenants of parents and school administrators to maintain the racial homogeneity of white schools.

When desegregation busing threatened to integrate student bodies, parents protested, sometimes violently. Even in 2019, many cities have acknowledged “black schools” and “white schools,” and people offer the same Jim Crow-era arguments against the admission of minority students.

From schools and hospitals to prisons and pool halls, the Jim Crow laws sought to keep white and black people separate, and to guarantee the continued subjugation of black people.

As Plessy v. Ferguson explicitly protected social, as opposed to legal, discrimination, African Americans and members of other minorities experienced systematic personal discrimination at the hands of whites. The classic instance is of a white person referring to a grown black man as “boy.” The reverse also applied: African Americans were expected to show deference and submission to whites, invariably referring to them as “Mister” or “Miss.”

But to describe what was expected of African Americans as a “code of behavior” is misleading. There were no rules, and so no one knew when they had broken them. It was simply a matter of whether white people chose to be offended.

In the famous case of Emmett Till, for instance, a 14-year-old African American boy was mutilated and murdered for speaking to a white woman in what his murderers considered an inappropriate fashion. What did Till say? No one knows. The white woman, Carolyn Bryant, gave, and continues to give, conflicting stories. The men who murdered Till weren’t even present. It was enough that someone told them he had spoken inappropriately. That was the “code” that justified lynchings, beatings and police violence in the Jim Crow South.

The Rise and Fall of Jim Crow

Jim Crow laws were subject to legal challenges throughout their existence, but real change would have to wait until the 1950s and ‘60s. Thanks in large part to the work of NAACP lawyer and future Supreme Court Justice Thurgood Marshall, in 1954 the Supreme Court ruled in Brown v. Board of Education that racial segregation in public schools was unconstitutional. President Johnson signed the Civil Rights Act in 1964 and the Voting Rights Act in 1965, officially abolishing all Jim Crow laws.

While there are technically no examples of Jim Crow laws today, they cast a long shadow over American life. A Texas cemetery attempted to defend its whites only policy as recently as 2016. To learn more about the heroes who helped to end the laws, have a look at our biographies of Rosa Parks, Fannie Lou Hamer and John Lewis.