Examples of Karma in Life and in Fiction

Karma is a belief that whatever you do will come back to you, either in this life or the next. It is embraced by followers of Buddhism, Hinduism and others around the world. For some, this is not only deeds, but thoughts and words as well. Many karma examples, both good and bad, can be seen in everyday life. 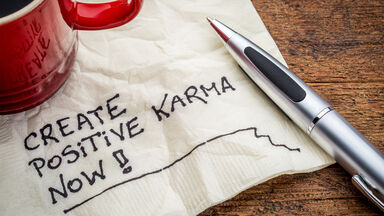 Taking a Look at Karma in Everyday Life

The phrase “what goes around comes around” illustrates what karma is. Sometimes consequences attributed to karma occur instantly, but sometimes the results of one’s actions can take quite a while to occur.

When a person does something good and that individual’s positive actions seem to lead to positive consequences, that can be described as good karma.

When a person’s negative or unethical behavior seems to result in negative consequences, that can be described as bad karma.

Historical Examples That May Be Karma

When considering some of the things that have occurred throughout history, it’s easy to get a sense that karma may be at play.

Examples of Karma in Literature, Film and Television

There are numerous quotes about karma and examples of karma can be found in many works of fiction. Considering how frequently karma seems to be at play in everyday life, it shouldn’t be surprising that karma is a common theme in literature, movies and television shows.

Is Karma at Play?

The next time something good or something bad happens to you, take a minute and think about whether it could be karma. Did something good that you did lead to a positive consequence? If you engaged in a negative action, did a related negative consequence occur. It’s certainly wise to consider that actions have consequences. While karma is on your mind, this is a good time to also consider the relationship between ethics, morals and values. Review some ethical dilemma examples and consider how karma might impact the consequences of what a person does. Then, explore more facts about Buddhism to better understand the concept of karma.