Examples of Landforms: List of Major and Minor Types

Landforms are natural physical features of the Earth's surface. As an element of topography, a landform is defined by its shape, location and how it was formed. Take a look at examples of landforms found on our planet as well as the minor landforms found in different biomes. 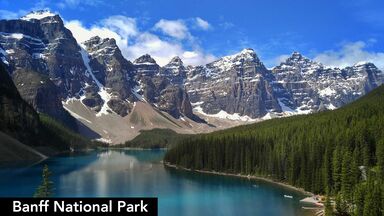 There are four major types of landforms on Earth: mountains, hills, plateaus and plains. When you picture these landforms, you might imagine large mountain ranges or wide plains. But these geographical landforms don’t only exist on dry land - they’re found on the ocean floor as well. Take a quick trip around the word with these examples of major landforms on the planet.

Examples of Mountains Around the World

Mountains are major landforms with higher elevation than the land around them. They have steep slopes and a summit, which is the highest point of elevation. Mountains are formed when tectonic plates collide and push land upwards over millions of years, and shaped by wind and water erosion. Other mountains are actually dormant volcanoes that have not erupted in a very long time.

Some examples of mountains and their elevations include:

Examples of Hills Around the World

Hills are smaller landforms than mountains, but they share many of the same characteristics. Like mountains, hills have a higher elevation than the land around them, and are often formed by tectonic activity and erosion. But hills are generally smaller (elevation is typically under 3,000 ft.) and not as steep as mountains. Foothills, for example, rest at the base of mountain ranges before the terrain increases its elevation.

Examples of hills around the world and their elevations include:

Examples of Plateaus Around the World

Famous plateaus around the world and the area they cover include:

Examples of Plains Around the World

Plains are a major landform known for their sea-level elevation and wide expanses. They are found between mountain ranges and are usually formed by erosion or deposits of water and lava. The total amount of land covered by plains is over 19 million square miles – more than one-third of the total land surface area on Earth.

Some examples of plains around the world and their areas include:

There are hundreds of minor landforms in the world. These landforms are created over millions of years by processes such as wind erosion, water erosion, tectonic activity, weathering, ocean currents, and volcanic eruptions. They’re found in various biomes, and despite how sedentary some of them look, they are always changing.

Landforms in desert biomes are often known as Aeolian landforms, named for Aeolus, the Greek god of wind. They are formed by either the erosive or constructive action of the wind. As the wind erodes the land it has the effect of sandblasting the surface of rocks or other geological features.

Examples of desert landforms include:

Coastal landforms are found on the edges of the ocean. They are primarily formed by water erosion from ocean currents over many years, as well as wind erosion and tectonic plate activity. Landforms such as islands and archipelagos are formed by underwater volcanoes.

Underwater landforms are formed in the same ways as their above-ground counterparts: tectonic and volcanic activity. Many oceanic landforms are also formed by water currents. Take a look at these examples of minor landforms and geographic features in the ocean.

When you picture volcanoes, you probably imagine huge explosions of lava and ash during an eruption. But underwater volcanoes are just as prevalent as volcanoes on land. Check out these landforms and geographic features found in volcanic areas.

The World of Geography

These major and minor landforms make up the natural world around us. Between the highest mountain and the lowest oceanic trench lies these geographical and geological wonders of our world. To explore more about the tectonic plates and activities that form these landforms, take a look at the three main types of faults in geology.