Literary terms are devices used to make writing better. These help the writer tell a story or make a point. Keep reading for examples of common literary devices that you might find in a story, nursery rhyme or poem. 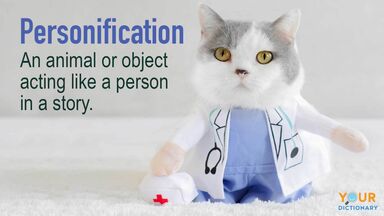 Alliteration is a literary term that means two or more words in a row that all start with the same consonant sounds. It's a sound device that you can hear when you read something out loud. Some examples of alliteration are:

Examples of Alliteration in Literature

You can find lots of examples of alliteration in poems and stories.

Hyperbole is a literary term that refers to an exaggeration. Hyperboles make something sound bigger or more extreme than it really is.

Examples of Hyperbole in Literature

You'll find examples of hyperbole in all kinds of literature.

Hyperboles appear in idioms and colloquialisms as well. Some popular examples of hyperboles in idioms are "He's as big as a house" and "Run faster than the wind." They make a great point in your writing as figurative language.

Metaphor is a literary term for comparing two things directly. They aren't literal statements, but they make a point using figurative language.

Examples of Metaphors in Literature

Metaphors use beautiful imagery and language to create mental pictures. Check out these examples of metaphors in stories and poems.

Metaphors are often found in analogies that compare two ideas. They're effective in poetry and stories, but if you listen carefully, you may hear them in conversation as well.

Onomatopoeia is a literary term used when a word imitates the sound it is describing. They're fun to read and write, and they appear more often than you'd think!

Examples of Onomatopoeia in Literature

Many nursery rhymes and poems include onomatopoeia.

Personification is a literary term for giving human traits to objects or animals. These traits may be human behavior, such as talking or having a job, or emotions such as happiness or sadness. Examples of personification include:

Examples of Personification in Literature

Whenever you read a book that has a talking animal, such as E.B. White's Charlotte's Web, you're reading an example of personification.

Personification can be humorous when used in poetry, songs and stories. It can also make a story easier to understand, such as in Aesop's Fables, and more enjoyable to read as well.