In simple words, logic is “the study of correct reasoning, especially regarding making inferences.” Logic began as a philosophical term and is now used in other disciplines like math and computer science. While the definition sounds simple enough, understanding logic is a little more complex. Use logic examples to help you learn to use logic properly. 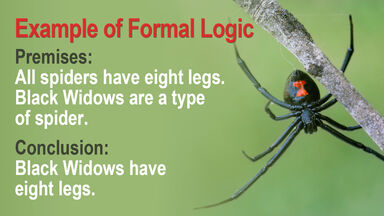 Logic can include the act of reasoning by humans in order to form thoughts and opinions, as well as classifications and judgments. Some forms of logic can also be performed by computers and even animals.

Logic can be defined as:

“The study of truths based completely on the meanings of the terms they contain.”

Logic is a process for making a conclusion and a tool you can use.

Definition of Logic in Philosophy

Logic is a branch of philosophy. There are different schools of thought on logic in philosophy, but the typical version is called classical elementary logic or classical first-order logic. In this discipline, philosophers try to distinguish good reasoning from bad reasoning.

Definition of Logic in Mathematics

Logic is also an area of mathematics. Mathematical logic uses propositional variables, which are often letters, to represent propositions.

Types of Logic With Examples

Generally speaking, there are four types of logic.

Informal logic is what’s typically used in daily reasoning. This is the reasoning and arguments you make in your personal exchanges with others.

In formal logic, you use deductive reasoning and the premises must be true. You follow the premises to reach a formal conclusion.

Symbolic logic deals with how symbols relate to each other. It assigns symbols to verbal reasoning in order to be able to check the veracity of the statements through a mathematical process. You typically see this type of logic used in calculus.

In mathematical logic, you apply formal logic to math. This type of logic is part of the basis for the logic used in computer sciences. Mathematical logic and symbolic logic are often used interchangeably.

Types of Reasoning With Examples

Inductive reasoning is "bottom up," meaning that it takes specific information and makes a broad generalization that is considered probable, allowing for the fact that the conclusion may not be accurate. This type of reasoning usually involves a rule being established based on a series of repeated experiences.