Fallacies are mistaken beliefs based on unsound arguments. While rhetorical tools are effective ways to persuade an audience, fallacies use only the appearance of logic to get you to agree with a weak or incorrect conclusion. Take a look at the most common types of fallacies so you don't fall for a bad argument ever again. 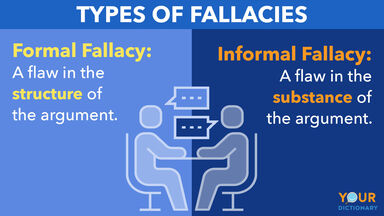 Formal fallacies include an error in the structure of their argument. "Formal" in this case doesn't mean "proper;" it relates to the form. They occur when the conclusion doesn't follow the premise. The pattern of deductive reasoning in these arguments seems logical — if A means B, and B means C, then A must surely mean C. These statements are also called syllogisms. However, there is an incorrect step somewhere in the structure of a formal fallacy, leading to a misleading conclusion.

These formal fallacies are also known as non sequiturs (Latin for "it does not follow"). Take a look at how a factual statement — "Sad movies make me cry" — can be rephrased as a fallacious argument. You can also check out everyday examples of these fallacies.

Also called fallacy of the converse, this fallacy involves a condition and a result, but they are switched, making the claim fallacious. ("If I'm crying, then I'm watching a sad movie.")

An appeal to probability (possibiliter ergo probabiliter) assumes that something will happen because it might happen. In other words, it's possible or probable. The fallacy is best known as Murphy's Law — the belief that if something can go wrong, it will. ("I'm watching a sad movie, so I will definitely cry.")

Also known as argumentum ad logicam or argument from fallacy, the bad reasons fallacy maintains that a conclusion is assumed to be bad because the arguments are bad. It can also be self-referential, as it claims that an argument that contains a fallacy must be inherently untrue. ("I don't always cry at sad movies, so I will definitely not cry when watching this sad movie.")

Another term for denying the antecedent is fallacy of the inverse. It involves an argument where if the condition is negative, then the result must also be negative. ("When I'm not watching a sad movie, I'm not crying.")

Fallacy of the Undistributed Middle

The fallacy of the undistributed middle (non distributio medii) is a logical fallacy in which the second part of a syllogism is distributed unequally. It leads to a misleading conclusion. ("This is a movie. I cry at sad movies. Therefore, I am crying.")

Quaternio terminorum is another syllogistic fallacy. You see it when a syllogism, which has three parts, now has four. ("I cry at sad movies, and this movie is funny, so I'm crying at this movie."

The masked man fallacy involves a substitution of parties. If the two things that are interchanged are identical, then the argument is assumed to be valid. But if there is a slight difference, the fallacy states that they are invalid. ("This movie is longer than the last sad movie I watched, so I will definitely not cry.")

Informal fallacies have to do with the substance or content of the argument rather than the form. They can be deductive or inductive, but they are fallacious due to a lack of supporting evidence and faulty reasoning. You're more likely to come across them than formal fallacies, and their variations are endless. Check out these types of logical fallacies that fall into the informal category.

Presumption of truth without evidence can cause fallacious reasoning. Examples of these types of logical fallacies include:

- Appeal to Ignorance (argumentum ad ignorantiam) - argues that a proposition is true because it has not yet been proven false ("Aliens must exist because there is no evidence that they don't exist.")

- Circular Argument (circulus in probando or circulus in demonstrando) - an argument takes its proof from a factor within the argument itself, rather than from an external one; in modern usage, it's very similar to begging the question ("Everyone loves Irina because she's so popular.")

- Complex Question Fallacy (plurium interrogationum) - asking a question that presupposes the answer to a previous question ("Do you still beat your wife?" assumes that the listener has previously beaten their wife.)

- False Dilemma (argumentum falsum dilemma) - sometimes referred to as bifurcation; occurs when someone presents their argument in such a way that there are only two possible options ("If you don’t vote for this candidate, you must be a Communist.")

- Hasty Generalization Fallacy - also known as "jumping to conclusions" ("Someone I know from New York is rude. Therefore, people from New York are rude.")

- Post Hoc, Ergo Propter Hoc - Latin for “after this, therefore because of this;" based upon an assumption of cause and effect ("I ate cereal for breakfast and then got into a car accident; therefore, cereal caused my car accident.")

- Slippery Slope Fallacy - one event will inevitably cause another semi-related event to happen ("If we let your brother stay, we’ll have to let your whole family stay.")

A fallacy can also be caused by a lack of clarity or by a misunderstanding of the words. Some people use ambiguous phrasing deliberately in their arguments to confuse the listener. Fallacies of ambiguity are also known as doublespeak.

Examples of these fallacies include:

- Accent Fallacies - also known as misleading accent; based on the stress or emphasis of a word or word parts being unclear; can also arise from a word of emphasis (The statement "You look beautiful today" followed by "Are you saying I don't look beautiful every day?")

- Equivocation Fallacies - occur when words are used multiple times with different meanings ("I have the right to free speech, so it's right for me to say whatever I want.")

- Fallacy of Division - the opposite of the fallacy of composition; assuming that something that is true for the whole is true for all of its parts ("My house is expensive; therefore, my door is expensive.")

- Straw Man Fallacies (argumentum hominem paleae) - include misrepresentations to form an alternate, weaker argument to attack ("You won't let me go to the party? Why don't you care about me?")

These fallacies attempt to persuade people with irrelevant information, appealing to emotions rather than logic. These can serve as valid rhetorical appeals when they have proper evidence and support, such as in ethos, pathos and logos, but on their own, they can be fallacious. Examples of these fallacies include:

- Ad Hominem ("attack on the person") - substituting an argument rebuttal with a personal insult ("What do you know about politics? You didn't even go to college.")

- Appeal to False Authority (argumentum ad verecundiam or argumentum ab auctoritate) - attaching an argument to a person of false or appeared authority in order to give credence to their argument ("My dad went to school, so he knows everything about the education system.")

- Appeal to Force (argumentum ad baculum) - claiming that an opinion is valid based on a threat of force ("You have to go to school because you'll be grounded if you don't.)

- Appeal to Popular Opinion (argumentum ad populum) - claiming that an idea or belief is true simply because it is what most people believe ("Lots of people bought this album, so it must be good.")

- Bandwagon Fallacy - contains arguments that are only appealing because of current trends and growing popularity ("Smoking is fine because everyone is doing it.")

- Gambler’s Fallacy - assumes that short-term deviations will correct themselves ("I've had bad luck for so long that I'm bound to have good luck now.")

- Genetic Fallacy - also known as the fallacy of origins; involves acceptance or rejection of concepts based on their source, not their merit ("My best friend says you’re a liar, so I’m not going to talk to you.")

- Red Herring Fallacy - uses irrelevant information or other techniques to distract from the argument at hand ("You're complaining because you have to walk to school? I used to have to give my parents my entire paycheck.")

- Sunk Cost Fallacy - the idea that the resources you've already used toward a goal make it worth continuing ("We've already spent $10,000 on the home renovation, so what's $5,000 more?")

- Tu Quoque Fallacy ("you also") - a form of ad hominem that turns criticism against the other person, such as in the famous pot-calling-the-kettle-black idiom or in whataboutism ("You can't criticize me for speeding because you were speeding yesterday.")

- Weak Analogy - employs analogies between things that are not really alike ("You let my sister pierce her ears when she was 11, so you should let me stay up until midnight.")

As you can see, there are many different types of fallacies. Informal fallacies are particularly complex because layers of subcategories exist within them. Now that you know what some of the most prevalent fallacies look like, you'll be able to identify these lapses in logic right away! Take a look at these examples of logic to keep your reasoning as reasonable as possible.