Examples of Lying: White Lies and Beyond

What is a lie? Lying means being dishonest or not telling the truth. There are many examples of lying that occur every day. Some lies are harmless lies considered "white lies," while others can be very hurtful and harmful. Discover 60+ lying examples, including both white lies examples and other, more serious, types of lies. 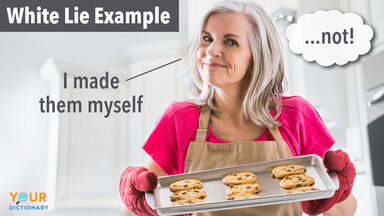 Some of the most common examples of lying occur when people tell a lie in order to be nice or to spare someone's feelings. These are called "white lies." Are you wondering, "What is a white lie?" These are trivial untruths that are told out of kindness rather than to deceive or to be malicious. There are many white lies examples in everyday life situations.

White Lies to Friends and Relatives

Since people spend so much time interacting with friends and relatives, it's not surprising that they're often the recipients of white lies.

Examples of White Lies in Relationships

People spend quite a bit of time working and going to school, so white lies often enter into situations related to these settings.

These white lies are all pretty harmless, and they are told in order to spare the feelings of someone that you care about or want to avoid offending. While there are some people who argue that you should never lie under any circumstances, the world would not necessarily be a very nice or very happy place if people told the truth all the time.

Other Types of Lies

Not all lies are essentially harmless white lies. Unfortunately, there are also some other lies that are much more harmful than little white lies. These are lies intended to be malicious, to deceive or to get something to which you are not entitled. Some examples of these types of lies include the following:

These types of lies can all be very harmful. A famous story illustrates the danger of lying. The story is of the little boy who cried wolf. The boy, over and over, sent the alert that a wolf was coming. Eventually, when a wolf really did come, no one believed him because he had lied too many times before.

Now that you have reviewed some white lies examples as well as a few more serious lies, consider the impact of being untruthful from an ethical perspective. Start by reviewing some ethical dilemmas. Then, consider some examples of integrity. Finally, consider the difference between ethics, morals and values. Once you are familiar with these concepts, you'll be better prepared to understand the implications of being less than truthful, even if the falsehoods are just white lies.