Lyric poetry is one of the three main genres of poetry. The other two are dramatic and narrative. Examples of lyric poetry abound; the category encompasses sonnets, ballads, odes and more. Dive into famous lyric poem examples. 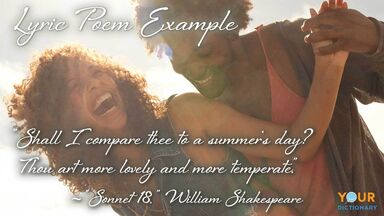 What Is Lyric Poetry?

Lyric comes from the Latin word lyricus, meaning of/for the lyre. These short poems were originally accompanied by music. So in lyric poetry, the mood is melodic and emotional. The writer uses words that express his or her state of mind, perceptions and feelings, rather than tell a story.

A lyric poem is usually written in the first person. Some of the best examples of lyric poetry come from Italian and English sonnets. Let’s take a closer look.

Let’s start with an English sonnet by none other than William Shakespeare. Here’s his famous "Sonnet 18:"

"Shall I compare thee to a summer's day?
Thou art more lovely and more temperate.
Rough winds do shake the darling buds of May,
And summer's lease hath all too short a date.
Sometime too hot the eye of heaven shines,
And often is his gold complexion dimmed,
And every fair from fair sometime declines,
By chance, or nature's changing course untrimmed."

"Go, Lovely Rose" by Edmund Waller is a famed example of a lyrical love poem in which the poet speaks to the rose he is sending to his love.

"Go, lovely Rose —
Tell her that wastes her time and me,
That now she knows,
When I resemble her to thee,
How sweet and fair she seems to be.
Tell her that's young,
And shuns to have her graces spied,
That hadst thou sprung
In deserts where no men abide,
Thou must have uncommended died.
Small is the worth
Of beauty from the light retired:
Bid her come forth,
Suffer herself to be desired,
And not blush so to be admired.
Then die — that she
The common fate of all things rare
May read in thee;
How small a part of time they share
That are so wondrous sweet and fair!"

Many lyric poems are about love, although they can be about anything which stirs emotions. "Italian Sonnet" by James DeFord, is a good depiction of this.

"Turn back the heart you've turned away
Give back your kissing breath
Leave not my love as you have left
The broken hearts of yesterday
But wait, be still, don't lose this way
Affection now, for what you guess
May be something more, could be less
Accept my love, live for today."

I Felt a Funeral, in my Brain by Emily Dickinson

This lyric poem, written by Emily Dickinson, is titled "I Felt a Funeral, in my Brain." Painfully, it describes a person who is going insane, or at least thinks they are.

"I felt a Funeral, in my Brain,
And Mourners to and fro
Kept treading - treading - till it seemed
That Sense was breaking through -
And when they all were seated,
A Service, like a
Drum -Kept beating - beating - till I thought
My Mind was going numb -
And then I heard them lift a Box
And creak across my Soul
With those same Boots of Lead, again,
Then Space - began to toll,
As all the Heavens were a Bell,
And Being, but an Ear,
And I, and Silence, some strange
Race Wrecked, solitary, here -
And then a Plank in Reason, broke,
And I dropped down, and down -
And hit a World, at every plunge,
And Finished knowing - then –"

If I Could Tell You by W.H. Auden

Get lost in this lyrical poem created by W.H. Auden. An English poet, Auden created his piece in the early 1940s with his classic lyric style.

Explore a more recent poem by Louise Gluck. This lyric poem dives into a memory.

"You saved me, you should remember me.

The spring of the year; young men buying tickets for the ferryboats.
Laughter, because the air is full of apple blossoms.

When I woke up, I realized I was capable of the same feeling.

I remember sounds like that from my childhood,
laughter for no cause, simply because the world is beautiful,
something like that."

Now that you’re familiar with examples of lyric poetry, let’s compare it to the other two branches of poetry’s tree, dramatic and narrative poetry. Dramatic poetry is written in blank verse and is meant to be spoken like monologues and soliloquies. Its main purpose is to tell a story or describe an event in an interesting and descriptive way.

The Law of the Jungle by Rudyard Kipling

Here’s an example from Rudyard Kipling’s "The Law of the Jungle," which is addressed to a wolf.

"Wash daily from nose-tip to tail-tip; drink deeply, but never too deep;
And remember the night is for hunting, and forget not the day is for sleep.
The Jackal may follow the Tiger, but, Cub, when thy whiskers are grown,
Remember the Wolf is a Hunter - go forth and get food of thine own."

The Laboratory by Robert Browning

"The Laboratory" by Robert Browning is another example of a dramatic poem.

"Now that I, tying thy glass mask tightly,
May gaze thro' these faint smokes curling whitely,
As thou pliest thy trade in this devil's-smithy--
Which is the poison to poison her, prithee?"

Narrative poems include ballads and epics, long stories detailing historic societies, heroic deeds or interesting events. They can also be very dramatic when re-telling a particular situation and were originally meant to be performed while dancing.

The Song of Hiawatha by Henry Wadsworth Longfellow

"The Song of Hiawatha" by Henry Wadsworth Longfellow is a long epic poem that tells the tale of the hero Hiawatha in a rhythm that mimics Native American chants.

"First he danced a solemn measure,
Very slow in step and gesture,
In and out among the pine-trees,
Through the shadows and the sunshine,"

Here’s an excerpt from "The Raven" by Edgar Allan Poe which dramatically details a mysterious event.

"Once upon a midnight dreary, while I pondered weak and weary,
Over many a quaint and curious volume of forgotten lore,
While I nodded, nearly napping, suddenly there came a tapping,
As of some one gently rapping, rapping at my chamber door.''

Could The World Exist Without Poetry?

Could our world exist without artists to capture life’s moments in lyrical movements? Sure, but wouldn’t it be a sad world, devoid of reflection? Ready to dive deeper into the different types of poems? Enjoy an exploration of haikus and limericks while you’re at it.

Then, move on to some free verse poetry. Free verse poems are the rebels of the bunch. They don’t follow any rules, nor have any rhyming patterns or rhythm. Skim through these examples of free verse poems to see if you can their unique nature. And, when you’re ready to put your own pen to paper, these tips on writing poems should put some wind in your sails.