Examples of Macroevolution Across Time and Species

You already know that all organisms have gone through evolution to become the plant, animal, fungus, bacterium, or other living thing they are today. But did that tree or mushroom occur as a result of macroevolution? Keep reading for macroevolution examples and how they differ from microevolution. 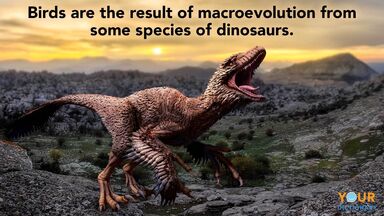 Macroevolution refers to a large-scale change of an evolutionary nature in a species. Unlike microevolution, which includes the four mechanisms of evolution on a smaller scale, macroevolution takes place over thousands of years and generations. Macroevolution is so substantial that it results in brand new species that are genetically different from their ancestors.

It's impossible to see the results of macroevolution within a human lifespan. Scientists determine the macroevolution of a species through research of the background of the species, testing the species, and observing, comparing and analyzing fossils.

Macroevolution can explain the existence of various types of plants, mammals, insects, sea creatures, and other living things. It is believed to have happened in the past and is currently happening. Take a look at these examples of macroevolution in our world.

There are thousands of different species of cichlid fish in Africa, and fossil records show that many of these species emerged within 100,000 years of each other. These species are genetically different from each other after many generations of adaptive evolution.

Modern birds are thought to have evolved from dinosaurs on a macro scale. Fossil records indicate that while most species of dinosaurs went extinct, a theropod called archaeopteryx links birds and therapod dinosaurs such as velociraptors.

Human macroevolution from our ape ancestors is indicated by fossil records. Examples of the fossils that support the theory of Homo sapiens macroevolution include Homo habilis, Homo rudolfensis and Homo erectus.

There are two types of fruit flies that evolved from one single species. These fruit flies cannot successfully mate with each other, indicating that they are two different species of insect.

In 1905 Hugo de Vries found that some of his evening primroses, Oenothera lamarckiana, had developed a variant number of chromosomes that were not able to be bred with the original plant. The new species was then named Oenothera gigas.

A sterile hybrid of the primrose species Primula verticillata and primula floribunda were crossbred. The offspring were fertile, therefore showing macroevolution, and were named Primula kewensis.

Tragopogon micelius was found in 1950 to have originated in through various hybridizations. The flower tragopogon mirus independently originated, indicating macroevolution of the tragopogon species.

An attempt by Russian scientist Georgii Karphchenko to cross a radish with a cabbage resulted initially in the creation of hybrid plant that was sterile. However, the seeds of those plants became fertile with the parent species, creating the new plant Raphanobrassica.

Macroevolution takes a very long time, but that time is marked by millions of tiny adaptations. These adaptations tend to take place within four different patterns. The four main processes of macroevolution are:

As you can see, macroevolution looks a lot like microevolution, except you're dealing with an entire species instead of a single organism. It's important to examine evolutionary processes on both the micro and macro scale to truly understand how our organic world works.

Macroevolution Makes the World Go 'Round

As these different examples of macroevolution show, you can trace the fossil record to demonstrate macroevolution. Macroevolution is a very important scientific theory that explains how current plants, people and animals came to be. Learn how macroevolution fosters biodiversity in our natural ecosystems. Or, get down into the genetic level with these examples of genotypes and phenotypes.