The term "mass" is used to refer to the amount of matter in any given object. Mass is often confused with weight; however, weight is a reference that relies on gravity in its determination. For instance, a person or object may be weightless on the moon because of the lack of gravity, but that same person or object maintains the same mass regardless of location. Keep reading for more examples of mass both on Earth and in our solar system. 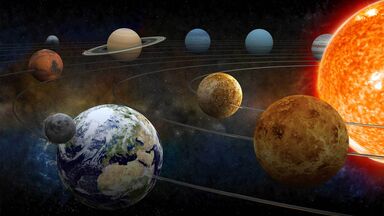 Mass is measured in kilograms (kg) to determine how much matter something contains. Scientists use the same measurement for very small items and enormous items. Take a look around your house to see if you can guess — or measure — their mass.

Take a look at these examples of mass in everyday objects.

When you think of the word "massive," you certainly think of an item that is very large. But once you start thinking about measuring mass, you'll find that "massive" items have quite a lot of mass. Here are the mass measurements of very large, massive objects on Earth.

If you're still confused about measuring weight vs. mass, take it to the sky. Planets, stars, moons, and other celestial objects may defy the laws of Earth gravity, but that doesn't mean they're without mass. Here are some examples of the mass of solar objects and their type.

These are all examples of different solar objects along with the mass of each object. Every object has its own unique amount of matter and thus has its own mass.

How to Find an Object's Mass

Finding an object's mass isn't as easy as placing it on a scale. How would we ever be able to measure planets or asteroids if that was all it took?

You find an object's with the following equations:

Once you find an object's mass, you can find its weight (measured in newtons) by multiplying the mass by the value of the gravitational field (g = 9.8 m/s2 on Earth). When you measure something on a scale, this conversion is done for you. Even this equation shows that mass does not require gravity as part of its calculation, while weight does.

Mass is considered to be the equivalent of the energy content of the object. There is a famous equation created by Albert Einstein that allows you to convert mass to energy content.

The equation is: E=mc2

Knowledge of mass is crucial in science. It tells you how much space an item takes up in the universe. Learn more about the physical properties of matter, including volume, length and area. Or, if you're ready for some change, take a look at 50 everyday examples of physical changes in the world.