Examples of Metaphors in Poems

A metaphor is a comparison between two things that states one thing is another in order to help explain an idea or show hidden similarities. Unlike a simile that uses "like" or "as" (you shine like the sun!), a metaphor does not use these two words. For example, in a famous line from Romeo and Juliet, Romeo proclaims, "Juliet is the sun." She isn't like or as the sun, she is the sun. Explore other examples of metaphor in poetry. 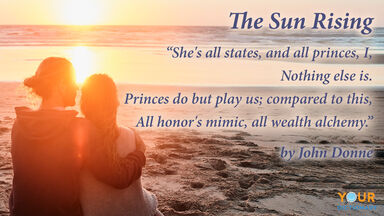 Metaphors are commonly used throughout all types of literature, but rarely to the extent that they are used in poetry genres. Because poems are meant to impart complex images and feelings to a reader, metaphors often state comparisons more poignantly. Take a look at a few examples of metaphor in poetry, which will allow you to see why they lend themselves particularly well to this form of writing.

The Sun Rising by John Donne

Metaphysical poet John Donne was well known for his use of metaphors. In this famous work, “The Sun Rising," the speaker tells the sun that nothing else is as important in the world as he and his lover.

“She's all states, and all princes, I,
Nothing else is.
Princes do but play us; compared to this,
All honor's mimic, all wealth alchemy.”

In his poem, Donne claims that his lover is like every country in the world, and he is every ruler — nothing else exists outside of them. Their love is so strong that they are the world, and all else is fake.

Sonnet 18: Shall I compare thee to a summer's day? by William Shakespeare

If there exists a poet who truly mastered the metaphor, that would be William Shakespeare. His poetical works and dramas all make extensive use of metaphors.

"Sonnet 18," also known as "Shall I compare thee to a summer’s day?" is an extended analogy between the speaker's lover and the fairness of the summer. However, through metaphor, Shakespeare communicates that the speaker's lover will remain beautiful and vital, though perhaps only in memory, captured by the final rhyming couplet.

“But thy eternal summer shall not fade,
Nor lose possession of that fair thou ow’st;
Nor shall death brag thou wander’st in his shade,
When in eternal lines to time thou grow’st:
So long as men can breathe or eyes can see,
So long lives this, and this gives life to thee.”

Love, like summer, is a life-giving force, but both come to an end. However, the poet's love and lover will live on as long as people read the poem.

When I Have Fears by John Keats

The romantic poet John Keats suffered great loss in his life. His father died in an accident, and he lost his mother and brother to tuberculosis.

When he began displaying signs of tuberculosis himself at 22, he wrote "When I Have Fears," a poem rich with metaphors concerning life and death. Keats employs a double metaphor. Writing poetry is implicitly compared with reaping and sowing, and that reaping and sowing represent the emptiness of a life unfulfilled creatively in the excerpt.

"Before high-pilèd books, in charactery,
Hold like rich garners the full ripened grain;
When I behold, upon the night’s starred face,
Huge cloudy symbols of a high romance,
And think that I may never live to trace
Their shadows with the magic hand of chance;
And when I feel, fair creature of an hour,
That I shall never look upon thee more,
Never have relish in the faery power
Of unreflecting love—then on the shore
Of the wide world I stand alone, and think
Till love and fame to nothingness do sink."

Keats' metaphor extends throughout the poem, the image of books of poetry unwritten stacked on the shelves of the imagination leading to an inexorable conclusion. The end of his life is represented here as a shore where he stands and meditates until he forgets the sorrows of his too-short existence.

Sylvia Plath's poem "Metaphors" takes a close and ambiguous look at her pregnancy through, unsurprisingly, several incongruous metaphors, making it a metaphor poem.

“I'm a riddle in nine syllables,
An elephant, a ponderous house,
A melon strolling on two tendrils.
O red fruit, ivory, fine timbers!
This loaf's big with its yeasty rising.
Money's new-minted in this fat purse.
I'm a means, a stage, a cow in calf.
I've eaten a bag of green apples,
Boarded the train there's no getting off.”

Not only is her poem a playful way to describe the shape of her body as a pregnant woman, some believe these lines are a metaphor for her fear of childbirth or perhaps the realization that being pregnant is only the start and she must now become a mother.

"Hope" is the thing with feathers by Emily Dickinson

Emily Dickinson uses a metaphor to compare hope to a bird in “'Hope' is the thing with feathers." She personifies hope as having feathers and perching in the soul, singing without end. Most people can relate to the feeling of hope; it lifts us up, stirring feelings of freedom and levity.

Dickinson focuses on the notion of hope because, even in times of tribulation, it may be the very thing that gets us through.

Paint Your Poetry With Metaphors

While poetry is an expression of self, it's also meant to make the reader ponder new perspectives. Metaphors are the perfect way to leave certain ideas open to interpretation while creating a new reality. Once you have metaphor poem examples mastered, take a look at metaphor examples for kids. It'll be a great way to help them learn how to paint pictures with their words, too.