Modifiers are words or phrases that dress up otherwise plain sentiments. It’s important for modifiers to stick close to the word or words they’re modifying. When they stray too far, they become misplaced modifiers — and if they get too far, it may look like they’re modifying something else. Take a look at several misplaced modifier examples and how these grammatical errors can lead to reader confusion. 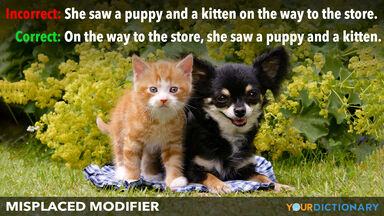 Adverbs and Adjectives as Misplaced Modifiers

A commonly misplaced modifier is an adverb. Because adverbs modify both verbs and adjectives, these misplaced modifiers often sound correct — but they're not. Check out these examples of misplaced adverbs and see how a quick wording change can clear them up (the modifiers are underlined, and their nouns are in bold).

Example #1: An End to His Driving

You'll often find an adverb between the subject and the verb of a sentence. But unless it's modifying the verb, it's a misplaced modifier. For example:

Words that function as both adverbs and adjectives can also be difficult to place. A word like "only," for example, could modify a noun, verb or adjective, depending on where it is in the sentence. For example:

This sentence makes it sound like only this one pastor, Pastor Johnson, paid $5. In other words, no other pastor paid $5 to clean the sidewalk. The intent is to emphasize that Pastor Johnson only paid a meager amount.

Because adverbs can modify both adjectives and verbs, they are easily misplaced. Read another example of adverbs as misplaced modifiers:

Moving one word gives these two sentences very different meanings! In the first sentence, "almost" modifies "failed," meaning that Iris barely passed every exam. However, the corrected sentence shows that "almost" actually modifies "every," revealing that Iris failed most of her exams and only passed a few.

Another example of misplaced adverbs comes from using adverbs of frequency. It can be a particular challenge in shorter sentences. For example:

This one is especially tricky because the modifier ("rarely") is next to the verb it modifies ("laugh"). However, in the first sentence, "rarely" is also next to the verb "are," making it sound like people who laugh don't become sad. The actual intent of the sentence is to show that people who don't laugh often ("rarely" laugh) have sad personalities. It's a subtle but important distinction.

No matter which type of phrase you use as a modifier, it needs to be next to the noun it's describing. Participial phrases are easy to misplace because they often come at the beginning or end of a sentence, while the word they're modifying might be in the middle of the sentence. Read these misplaced modifier examples featuring participial phrases.

Starting a sentence with a participial phrase is an effective way to vary your sentence structure. However, be sure that your subject comes right after your modifier in these cases. For example:

The first sentence makes it seem as though Mary's presents were eagerly awaiting Mary's birthday. Since presents can't exhibit the emotion of feeling eager, it’s unlikely that this modifier is written correctly. The most logical explanation is that Mary was eagerly awaiting her own birthday. The sentence should be rewritten so the modifier actually modifies Mary.

The phrase “tired of all of the nights in hotels” is modifying the noun "delight." Unfortunately, “delight” can't be tired, because delight isn't a person. Instead, it is more likely that “Mitch” is tired. We can correct this sentence by moving the proper subject next to the modifier.

Participial phrases that begin with the participles "named" or "called" can be problematic in a sentence. If you misplace these phrases, you're renaming the wrong noun. For example:

Because the phrase "called Prince" comes right after "sister," it sounds like the sister’s name is Prince, which is probably not true. A quick rewording can make it clear that the horse is named Prince, and James purchased it for the sister.

Another common modifying phrase that tends to be misplaced is the prepositional phrase. These misplaced modifiers can make one noun sound like it's in an entirely different (and often strange) location.

Prepositional phrases can also modify verbs, but only when they're next to those verbs. Otherwise, it looks like they're modifying another word. For example:

Using passive voice in a sentence can lead to prepositional phrases as misplaced modifiers, especially when they begin with the preposition "by." For example:

Modifiers are one of the most beautiful elements of the English language. They paint our prose and add starlight to our stanzas. Just make sure your modifiers are standing as close as possible to the word or words they’re describing. If you need a little more assistance with these grammatical errors, check out a misplaced and dangling modifiers worksheet that can help you tell the difference. You'll be able to quickly correct misplaced modifiers in no time.