Examples of Mnemonics: 4 Tools to Help Your Memory

A mnemonic is a tool that helps us remember certain facts or large amounts of information. They can come in the form of a song, rhyme, acronym, image, phrase, or sentence. Mnemonics help us remember facts and are particularly useful when the order of things is important. Below, we’ll explore several examples of mnemonics that’ll help us remember everything from tricky spelling words to U.S. presidents. 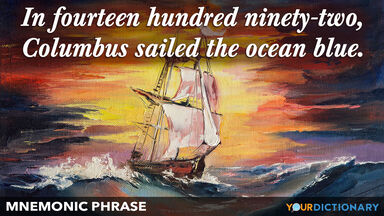 Are you a fan of spelling bees? Who doesn’t love a bright blue ribbon hanging proudly by their desk? If you have some tricky words coming up on next week’s spelling bee or spelling test, see if you can come up with any spelling mnemonics. All you have to do is construct a phrase or sentence where the first letter of every word represents the difficult spelling word. Take a look:

Often, we need to remember the specific order of things. This can include scientific principles, music-related teachings, mathematical equations, and more. Here’s a great list of mnemonics to demonstrate just how handy they are.

The Order of Taxonomy

In science, species are organized under a number of categories. Think of them like Russian nesting dolls. The order, from largest to most specific, is as follows:

To help students remember the order of taxonomy, the following sentence is often used:

The first letter of each word in the sentence represents the category. So, “kids” represents “kingdom,” “prefer” represents “phylum,” “cheese” represents “class,” and so on. Let’s look at a few more examples.

The Order on a Music Staff

When reading music, the notes on the staff (the lines) with a treble clef are: E, G, B, D, F. To help new students of music remember the order of the notes, the following sentence can be memorized:

As for the spaces on the same staff, they read as follows: F, A, C, E. To remember that order, there’s this wonderful mnemonic device:

Next, we have the lines on the staff with a bass clef, as read from the bottom: G, B, D, F, A. For this, musical students often use this line:

Order of the Planets

Let’s return to science. Do you know the order of the planets (from closest to furthest from the sun)? They are:

To help you remember the order, try this:

Since Pluto has been removed from planet status, there’s a new mnemonic device in town that doesn’t include it:

Let’s move onto math. When working out equations, there’s an order of operations to follow:

To remember this order, try:

The Order of the Great Lakes

Mnemonics are also useful when studying geography. To remember the order of the Great Lakes from west to east, try:

Super Man helps every one.

Technically, “Superman” and “everyone” should be one word each. But, mnemonics enjoy a little bit of wiggle room if the shoe fits. This device will help you remember the order of the lakes:

Just don’t forget to put the proper noun “Lake” before each title, as in “Lake Superior,” “Lake Michigan,” and so on.

How about a little history? If you have a quiz coming up on the order of the presidents, you can easily remember the first eight with this sentence:

Will a jolly man make a jolly visitor?

Each letter stands for the last name of each president, in order from the first:

The Articles of the Constitution

The United States Constitution has seven articles, or sections, which detail how the government works. They are:

To remember each article, students often refer to this mnemonic:

The Value of Pi

We saved the best for last. This one’s really fun. Below, you’ll find a sentence containing eight words. Each word stands for the numerals in pi. They are: 3.1415927. How does each word represent each numeral? Well, the number of letters in each word equals each numeral. Here’s the sentence:

May I have a large container of coffee?

Who said you couldn’t have fun with math?

Acronyms are short words formed by a series of letters. Typically, they’re the first letter of each word in a phrase. If you think it seems like they’d work hand in hand with mnemonics, you’re right! Take a look at this list of list of mnemonics containing acronyms.

The Spectrum of Colors

The spectrum of colors are as follows:

They can be remembered using this acronym:

The essential amino acids are as follows:

To remember them, try to recall this fictional fellow:

Pvt. is the abbreviation for “Private,” a class of soldier within the United States military.

If you sprain your ankle (or any other body part), there’s a specific order for treating the injury. It is:

Have you studied coordinating conjunctions yet? They’re the most popular form of conjunctions. They join ideas together with words like:

To remember these words, think of a crowd of boys at a rock concert, otherwise known as:

Remember the fun we had with the Great Lakes above? Super Man helps every one? Well, if the order doesn’t matter and you just want to remember the names, here’s an acronym for you:

You can probably guess the names this time around:

Examples of Rhyme or Poem Mnemonics

Have you ever had a song stuck in your head? Sometimes it’s the melody that sticks; sometimes it’s the lyrics. There are some useful rhyming mnemonics that’ll help you remember essential life facts.

If you’ve ever tried to remember which months have 30 days and which have 31 days, there’s a helpful rhyming mnemonic for that:

Thirty days hath September, April, June, and November;
All the rest have thirty-one,
Save February, with twenty-eight days clear,
And twenty-nine each leap year

I Before E Except After C

Ah, grammar rules. Sometimes, all you can say about the rules of the English language are “because my teacher said so.” When it comes to spelling and vowels, the best way to remember the tricky “I” and “E” duo is to say this:

Here are 11 more rules of grammar to consider! Next up, let’s take a look at two poems that will help sailors predict what tomorrow’s weather might look like.

If you enjoy meteorology, you might consider some of these generally accepted truths:

A red sky means there’s dust in the air, which shows high pressure, meaning good weather is coming. At dawn, a red sky may also mean dust, indicating a storm is moving in from the west. Red may also mean humidity, which may foretell rain.

If you’d like to make the most out of mnemonics when studying for spekking, check out these Study Habits for Spelling Tests. They’ll be sure to help you ace the next bee or quiz.