A monomial is an expression in algebra that contains one term, like 3xy. Monomials include numbers, variables or multiple numbers and/or variables that are multiplied together. Any number all by itself is a monomial, like 5 or 2,700. A monomial can also be a variable, like "b" or "y." It can also be a combination of these, like 98b or xy. Explore the rules of monomials, monomial degrees and monomial examples. 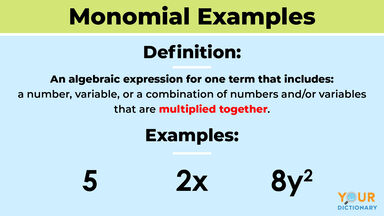 One of the first math terms you learn in algebra is monomials. When it comes to understanding the definition of a monomial, it’s pretty easy. Mono means “one.” So, monomial functions are those expressions that only have the one term. While a monomial can be a single number, variable or combination of a number and variables, it can’t be a negative exponent. Therefore, monomials have two rules.

The Rules of Monomials

Math always includes a few rules and monomials aren’t any different. There are two rules to remember about monomials. In these examples, the * symbol stands for multiplication.

2. A monomial multiplied by a constant (number) is also a monomial.

Examples: Numbers That Are Monomials

Examples: Variables That Are Monomials

It might be hard to think of a variable as a monomial, especially when you get to a group like abc. But remember one of the rules of monomials, a monomial multiplied by a monomial is still, you guessed it, a monomial. Therefore, variables multiplied by each other are also monomials. Look at a few examples.

Examples: Combinations of Numbers and Variables That Are Monomials

Numbers and variables aren't going to stand alone when it comes to monomials. They can work together. Therefore, 645a is still a monomial. Explore a few other examples of combinations of monomials.

Degrees of a Monomial Function

What Is Not a Monomial

A monomial is an algebraic expression with only one term, so 132y÷ 9y or 47z + 2y are not monomials. These are called polynomials since they have a finite number of terms. Explore a few examples of equations that are not monomials.

All algebraic expressions with one term are examples of monomials — so there are countless examples that encompass the entire number system. Ready to keep your math knowledge going? Take a look at polynomials and monomials.