Examples of Morals in Society and Literature

Morals are formed out of a person's values. Values are the foundation of a person's ability to judge between right and wrong. Morals build on this to form specific, context-driven rules that govern a person's behavior. They're formed from a person's life experience and are subject to opinion. 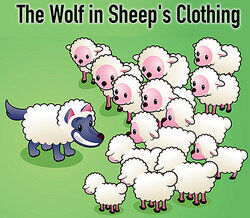 A wolf in sheep's clothing as examples of morals

For example, someone's morals might indicate they're opposed to murder. That's a pretty general rule of thumb. But what about something more mundane? While one person's morals might tell them not to gossip, another person's morals might be quite different. They might not consider gossip to be a bad thing. Consider the following examples of morals and see how many line up with your core values and beliefs.

Is there really a standard moral code in society these days? Yes, while most people follow society's laws, they also abide by certain social mores, which are governed by morals. While morals tend to be driven by personal beliefs and values, there are certainly some common morals that most people agree on, such as:

For a deeper dive into the difference between values and morals, read What's the Difference Between Ethics, Morals, and Values?.

The Ten Commandments are often considered the basis for societies founded on Judeo-Christian principles. You'll notice some overlap with the list above, as many of these principles are still embedded in general society.

Examples of Morals in Literature

Keep in mind that examples of morals in a story are different from the moral of a story. Remember, morals are rules that govern a person's behavior. The moral of a story, however, is the overarching teaching the author is trying to present. Of course, the two can align but they are separate entities.

For example, a character might be fighting to release his wrongly-convicted wife from prison because his morals tell him a man's job is to defend his wife. In his quest to free her, he will do anything, including lying and deceiving (which we know to be in contrast to sound morals), to get her out. In this case, the moral of the story isn't, "Be honest," or, "Don't lie." Rather, it could be "Family comes first."

In Harper Lee's To Kill a Mockingbird, Atticus Finch is a white man defending a black man named Tom Robinson, accused of raping a young girl. In the Deep South in the 1930s, this was scandalous, due to pervasive racism. Nevertheless, his morals tell him to protect and serve every member of society, no matter the color of his or her skin.

When the narrator, Scout, asks her father why he's defending Robinson, he says, "You really never understand a person until you consider things from his point of view -- until you climb into his skin and walk around in it." Atticus was teaching her empathy and not to judge, both sound morals.

Branna and her brother specifically tell Iona not to cross over certain vines and enter into a part of the forest where the evil sorcerer could capture or injure her. One day, Iona hears her name being called and, in a trance-like state, starts to enter the forest. Luckily, she was able to break the trance before she entered the forest but, when she returned home, she said this to her cousin:

I should tell you something first. I don't break my word. It's important. But today, walking back from the stables, I started to go through those vines. I didn't mean to, but I thought I saw a light, and I heard my name, over and over. It was almost like the dream I had. I felt out of myself, pulled in. Like I needed to go through, to whatever waited. Kathel stopped me -- again. I don't break promises, Branna. I don't lie.

Here, we don't have to deduce her morals. They're clearly stated. She doesn't break her word; she doesn't lie. Her morals go on to build a story filled with bravery and courage. Perhaps the moral of the story is to always be brave and do the right thing, but that stems from Iona's sound morals.

The most prolific source of moral lessons in literature is Aesop's Fables. Let's see some of the teachings that lie within these popular tales:

These examples of morals and moral lessons demonstrate that, although there are certain morals followed by society as a whole, morals are also highly personal. They're based on a personal belief system. In literature, often the moral of the story stems from a central character's set of morals, but it's interesting to see how someone's morals move the story along.

If you're looking to create an interesting story with relatable morals, take a look at these character trait examples. From them, you might be able to develop the central character's morals, thus creating a fanciful tale.