One of the most exciting techniques used by narrative writers is the careful weaving of a central element, called a motif, throughout a story. This can be an object, a sound, an expression, a setting, or a sentiment. Keep reading for several motif examples in literature. 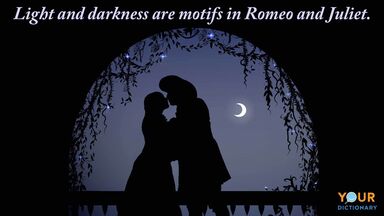 What Is a Motif?

Often, motifs spring to life through the use of repeated imagery or language. Sounds and visual descriptors can also encapsulate a motif, as they continue to reappear throughout a story. A popular one is the green light used by F. Scott Fitzgerald in The Great Gatsby.

Motifs can also be woven through a story with phrases that keep reappearing. In Macbeth, Shakespeare uses the expression "fair is foul, and foul is fair" to centralize his sentiment about the constancy of good and evil and things not being what they seem.

Examples of Motif in Narrative Writing

So now we know that a symbol contributes to a motif and a motif reinforces a theme. Let’s examine different scenarios where motifs might reappear to paint a masterful picture. What the motif could represent is shown in brackets.

Did you notice each of these examples seemed to echo the function of a symbol? Let's look at the blue bird on the windowsill. If he'd only stopped by to say hello one morning, he'd merely be a symbol of leaving. The moment he kept reappearing every morning, he became a motif.

Examples of Motif in Literature

Motifs are an important component of literature. They establish literary elements such as mood, foreshadowing, characterization, and theme. A well-written literary work uses motifs in subtle but important ways.

Shakespeare was a master of almost every literary technique. While MacBeth focused on good and evil, Romeo and Juliet focused on light and darkness. That motif was encapsulated in the brightness of the night moon, the stars that lit the sky and the bright flash that lightning provides.

"But soft, what light through yonder window breaks?
It is the east, and Juliet is the sun.
Arise, fair sun, and kill the envious moon,
Who is already sick and pale with grief
That thou, her maid, art far more fair than she. . . .
The brightness of her cheek would shame those stars
As daylight doth a lamp; her eye in heaven
Would through the airy region stream so bright
That birds would sing and think it were not night."

Romeo refers to Juliet as light throughout the play, she is “the sun” and her eyes are like “two of the fairest stars in all the heaven.” Their love is a light that shines brightest in the darkness but is ultimately consumed by it.

In Old Man in the Sea, Ernest Hemingway uses animals as motifs, but they're not the sea animals you might expect. The main character, Santiago, repeatedly dreams about lions, even when he is far from land and surrounded by other predators.

"After that he began to dream of the long yellow beach and he saw the first of the lions come down onto it in the early dark and then the other lions came and he rested his chin on the wood of the bows where the ship lay anchored with the evening off-shore breeze and he waited to see if there would be more lions and he was happy."

Lions in another character's dream may indicate a menacing or fearful tone. However, to Santiago, lions are comforting. They remind him of his childhood and dreaming about them makes him happy. The very last line of the book, "The old man was dreaming about the lions," indicates that the old man has finally found peace, whether he is sleeping or has died (according to some interpretations).

Let's take a look at another prevalent tale, Jane Austen's Pride and Prejudice. Journeys kept popping up, establishing the motif of change. Elizabeth's journey to visit Charlotte first introduces her to Mr. Darcy. Her second journey to Derby and Pemberley brings her back into contact with Darcy again.

"Occupied in observing Mr. Bingley’s attentions to her sister, Elizabeth was far from suspecting that she was herself becoming an object of some interest in the eyes of his friend. Mr. Darcy had at first scarcely allowed her to be pretty; he had looked at her without admiration at the ball; and when they next met, he looked at her only to criticise. But no sooner had he made it clear to himself and his friends that she hardly had a good feature in her face, than he began to find it was rendered uncommonly intelligent by the beautiful expression of her dark eyes. To this discovery succeeded some others equally mortifying."

Sure enough, Darcy embarks on his own journey, too, when he saves the family honor by tracking down Wickham and Lydia. Darcy serves as a motif for Elizabeth's growth and development throughout the novel.

Of Mice and Men by John Steinbeck

John Steinbeck's novel Of Mice and Men is a shorter literary work but still has lots of space for symbolic motifs. One of the main motifs in the book is rabbits; specifically, the rabbits that are supposedly waiting to be fed by George and Lenny once they have their own land.

"An' live off the fatta the lan'," Lennie shouted. "An' have
rabbits. Go on, George! Tell about what we're gonna have in the
garden and about the rabbits in the cages and about the rain in the
winter and the stove, and how thick the cream is on the milk like
you can hardly cut it. Tell about that, George."

The men have placed all of their hopes into the future, which comes up every time Lenny mentions the rabbits. It's almost a code word for Lenny and George when they need to think about brighter days. There are rabbits in the opening scene of the novel, and George and Lenny talk about the rabbits just before George shoots Lenny in the back of the head.

A strong motif in Emily Brontë's Wuthering Heights is the repeated presence of dogs. The story begins with Heathcliff's rough treatment of his dog, as opposed to Lockwood's inclination to pet her.

"I took a seat at the end of the hearthstone opposite that towards which my landlord advanced, and filled up an interval of silence by attempting to caress the canine mother, who had left her nursery, and was sneaking wolfishly to the back of my legs, her lip curled up, and her white teeth watering for a snatch. My caress provoked a long, guttural gnarl.

'You’d better let the dog alone,' growled Mr. Heathcliff in unison, checking fiercer demonstrations with a punch of his foot. 'She’s not accustomed to be spoiled — not kept for a pet.' Then, striding to a side door, he shouted again, 'Joseph!'”

Heathcliff's abuse is again evident when he kills Isabella's dog upon leaving Thrushcross Grange. This act foreshadows Healthcliff's treatment of Isabella, as the motif of dogs establishes that his character is animalistic and cruel

Motifs are sometimes confused with themes. While they are very similar — both weave through a story — the easiest way to differentiate the two is to remember a motif is something tangible (like the green lantern or Shakespeare's catchphrase) while a theme is abstract (such as feelings of love or a character's underlying loneliness).

It's a fine line between the two. In the end, a green lantern may be a physical object, but it's a repetitive symbol for the theme of constancy. The two elements work together, much like a painter's brush and palette.

Symbols can also be confused with motifs. By definition, a symbol is an object representing a larger idea, like a heart is a symbol for love. That sounds like a motif, doesn't it? There's one big difference.

Motifs are wonderful ways to say, "A change is coming," or "She's a lost soul," without overtly writing that. Readers are able to watch tales unfold while subtle moods and feelings start to emerge from the pages simply through a repeated concept or object. The mind ends up getting a good workout and, in the end, a story's true sentiments stay with you forever. Take a look at these examples of mood in literature and writing for more tips on establishing the mood in your writing.