Natural selection, a concept first theorized by Charles Darwin and Alfred Russel Wallace, is the adjustment of genes (DNA) throughout generations based on factors that help living organisms survive and reproduce. Sometimes this is known as survival of the fittest or the adaptation of organisms that are better suited to the environment. 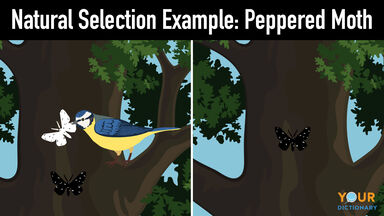 What Is Natural Selection?

This idea that species change over time in order to survive in their environment is what natural selection is. This idea is the cornerstone behind Charles Darwin's theory of evolution. Practically speaking, natural selection occurs when mutations (changes) to an organism's DNA are advantageous. Such mutations giving the organism a competitive advantage.

There are many real-world examples of the impact of natural selection in animals throughout the animal kingdom.

Humans have evolved significantly through history and are still evolving. Discover some examples of natural selection in humans.

Examples of Natural Selection in Plants

While natural selection tends to occur much more slowly in plants than animals, it does definitely happen.

Natural selection depends on the environment. Traits that are helpful in one environment will not be helpful at all in others. Organisms that have the ability to adapt to their environment are the ones that will survive and pass on their mutated genes to their offspring.

Charles Darwin demonstrated that organisms with inheritable traits that help them survive and reproduce will become more common in a habitat over time. This is the mechanism for evolution. Now that you better understand how natural selection works and how different species today have been shaped by natural selection, consider some examples of evolution in biology and beyond. To learn even more, explore examples of macroevolution across time and species.