Examples of Nonrenewable Resources and Their Uses 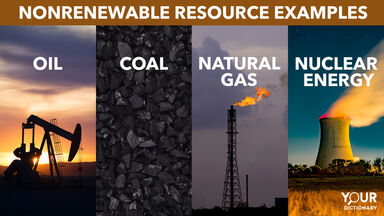 The most well-known nonrenewable resource is fossil fuels. These are derived from organic matter trapped between layers of sediments within the Earth for millions of years. Organic matter, typically plants, has decomposed and compressed over time, leaving what is known as fossil fuel deposits.

These deposits and the materials produced from them tend to be highly combustible, making them potent energy sources. They’re difficult to obtain because they’re typically retrieved through drilling or mining.

Crude oil is a nonrenewable resource that builds up in liquid form between the layers of the Earth's crust. It’s retrieved by drilling into the ground and ocean floor and pumping the liquid out. The liquid is then refined and used to create many different products.

Petroleum deposits that begin to form underground are known as oil sands, bitumen or bituminous sands. Bitumen is too thick to be pumped under natural conditions. Scientists refer to it as cold molasses. With special machinery, much of this is being mined in Alberta, Canada, serving as a major energy source for Canadians and people worldwide.

Natural gas gathers below the Earth's crust and, like crude oil, must be drilled for and pumped out. Methane and ethane are the most common types of gases obtained through this process.

Coal is the last of the major fossil fuels. Created by compressed organic matter, it is solid as a rock and is obtained via mining.

The other form of nonrenewable resources used to produce energy, nuclear fuels, is primarily obtained through the mining and refining of uranium ore.

Uranium is a naturally occurring element found within the Earth's core. Most uranium deposits occur in small quantities, which miners gather, refine and purify. Once gathered, the uranium is brought together and compounded into rods. The rods are then submerged into tanks of water.

When it reaches critical mass, uranium begins to break down and release energy, which heats the water it is immersed in. The breaking down is known as fission. The heated water then creates pressure. This pressure drives the turbines that generate electricity in nuclear power plants.

Relying heavily on an energy source that could potentially run out seems like a dangerous endeavor, right? The truth is, it's not known how long resources like oil will be readily available for consumption. That’s why scientists are working to develop alternate fuels. Here’s a closer at the Earth’s renewable resources.