Nonverbal communication is colorful and full of intrigue. A shrug of the shoulders and a roll of the eyes allows us to say, “I don’t like you,” without uttering a single word. Better yet, a warm smile and an outstretched hand says, “I’m so glad to see you.”

In every personal encounter, we send and receive nonverbal communication cues whether we realize it or not. While the world encourages us to “be ourselves,” there is a time and a place for nonverbal cues. When we’re at work, it’s wise to take note of how we communicate with both our words and our gestures. Together, let’s dive in to several examples of nonverbal communication. 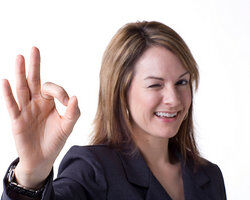 The first, and most obvious, clue to nonverbal communication is a person’s facial expressions.

Even though we only have one face, it can exhibit a wealth of expressions. From a half smile, to a full-blown smirk, to a casual eye shift, our facial expressions demonstrate a range of emotions. Instead of delving into all the nuances like a quirk of the lip or a twitch of the eye, let’s take a look at the three most prominent expressions:

An expressionless face is hard to decipher, so if you suspect you’re exhibiting what’s known as a “stone” face, it might be nice to pop in a gentle smile from time to time.

People place a lot of stock in eye contact. If you’re talking to someone and they don’t look up at you at all, you’re going to feel put-off and ignored. But, the fact that someone’s looking down a lot can also mean they’re shy. Someone lacking in confidence tends to have trouble making and maintaining eye contact.

If you struggle with eye contact, it’s the kind of thing you have to practice in order to improve. Like public speaking, it must be practiced. And it’s a nice skill to have, because it allows people to see you’re engaged and interested in what they have to say.

Of course, extended stretches of eye contact can have the opposite effect; it can make people feel uncomfortable. You’ll find the happy medium the more you practice.

While the face is a dead giveaway for mood, the entire body is a barometer. Have you ever watched a heated debate through a glass conference room? Here are some of the things you might’ve witnessed:

On the other hand, if everyone’s sitting peacefully around a conference table, you can still note nonverbal communication cues. What if someone has their arms crossed? Knowingly or unknowingly, they could be saying, “I’m closed off to you and your ideas.”

Conversely, if someone’s resting their hands on the table with a relaxed and open posture, they’re conveying a message of openness and willingness.

What if someone is fiddling with their pen or coffee mug and not looking directly at the speaker? This could be a sign they’re bored with the subject. Or, it might have nothing to do with the speaker at all. They may be preoccupied by their personal lives. Either way, it can be a signal they’re not fully present.

Interestingly, fiddling is also a sign of excitement. If someone is fiddling with their pen or coffee mug but is fully engaged with the speaker, they may have a high level of energy. In this case, fiddling is their way of letting some of that energy out. It’s kind of like someone whose leg keeps bouncing. They’re either preoccupied, or full of energy and ready to rock.

There’s not a lot of delineation in this example. If someone’s volume is elevated and they’re speaking rapidly, they’re-in some way-excited. Either something’s wrong or they’re amped up. On the contrary, if someone is speaking in calm, slow tones, they’re probably conveying their message without any cause for concern.

The way we inflect our words also impacts how they’re interpreted. For example, if someone says, “I thought you were coming to Florida this weekend!” it could mean they hoped you were coming and they’re glad to see you.

That same person can also say, “I thought you were coming to Florida this weekend,” meaning, “Why are you arriving Sunday evening? You’re late.” So, the inflection of our words conveys a message as much as the actual words we choose.

Remember that conference room full of angry people? There was probably a lot of finger pointing and several invasions of personal space. All this indicates attack mode. Someone’s aggressively conveying they’re looking to “get you” or prove a point. In this line of attack, someone can also reach out and grab someone by the arm to shock them into attention.

That said, we typically consider physical touch in a positive and personal light. If someone’s sitting at their desk crying, someone’s likely to put a hand on their shoulder and ask them what’s wrong. These signs of touch are meant to be comforting while forging a connection. Someone can also give a light touch to a co-worker’s arm as they say thanks.

In every instance, bad or good, touch is designed to strengthen the message being sent.

Our final example is a little bit more controversial. We’re taught not to judge a book by its cover. We can’t assess a person’s intelligence or demeanor by the clothes they wear. Yet, in a professional setting, one’s appearance does send a message. This is why we wear suits to interviews or enjoy casual Friday at the workplace.

Our everyday attire and hairstyle sends a message. Imagine a woman who always wears bright, bold tones. Perhaps she wears orange suits with red blouses or yellow skirts with royal blue shirts. This is a woman who’s not looking to be a wallflower. You can probably roll the dice on her high level of self-confidence.

On the other hand, just because someone chooses muted tones or grays, it doesn’t mean they’re shy. They might simply prefer a simplistic style. To them, less may be more.

Either way, how we present ourselves to people and situations tells a story. We’re told to take our hats off at the table, put a comb through our hair, and wear our Sunday best for a reason. It shows we put a little thought into the interaction.

The study of nonverbal communication is an interesting one. There are many layers and most elements don’t follow hard and fast rules. While a raised voice means you should probably tune in, not every crossed arm is meant to send a negative sign.

Since we can’t read people’s minds, we have to do our best to remain in tune with their nonverbal communication. But, we probably won’t always be right. The only thing we can control is our own communication. Take note of your level of engagement. See if you can sense when you’re unknowingly frowning or fidgeting.

It’s an interesting study and one you can begin today. Why not take these nonverbal communication cues to your next interview? While you’re at it, nail the dreaded, “What are your weaknesses?” question with these interview tips.