Nucleic acids are often termed "the building blocks of life." These acids are found in the nuclei of cells and help to synthesize proteins, replicate cells, store and transmit cellular information, and govern the cell's chemical processes. Keep reading for examples of nucleic acids in the body and what they do. 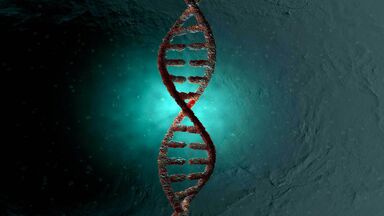 What Are Nucleic Acids?

Nucleic acids got their name because they were initially found in the cell nucleus. However, scientists have since found these acids in other areas of the cell (and in cells without nuclei, like viruses). The elements in all nucleic acids include carbon, hydrogen, oxygen, nitrogen, and phosphorus.

The most common types of nucleic acids are:

Note that all of these acids end in "NA," which stands for "nucleic acid." They are made up of five pieces, or monomers: guanine (G), cytosine (C), thymine (T), uracil (U), and adenine (A). These monomers are also called nucleotides. While they have different structures, functions and processes, life as we know it depends on these valuable acids working together.

You may know that DNA is essential to life, but how? DNA stores and uses an organism's genetic code to allow an organism to stay alive and reproduce. Here are some key details about the most well-known nucleic acid.

It may seem like all you need is a solid DNA sequence for life to exist. But DNA can't function on its own! When it comes time to replicate cells, it relies on RNA to get the job done.

If DNA are the cell's blueprints, the different types of RNA are its workers. Unlike DNA, RNA is a short-lived molecule that includes only a copy of the DNA sequence. It also includes uracil (U) instead of thymine (T). The main details for this nucleic acid include:

Messenger ribonucleic acid, or mRNA, is the least stable form of RNA. It's synthesized in the nucleus during transcription and begins the copying process. Some facts about mRNA include:

Now that mRNA has copied the DNA code, it's time to work toward translation. That's where tRNA and rRNA come in.

Transfer ribonucleic acid is responsible for reading the code and writing the amino acid sequence. Here are the basics of tRNA:

tRNA needs mRNA to tell it the code sequence. It also needs rRNA as it transfers amino acids onto the new protein chain.

Ribosomal ribonucleic acid, or rRNA, makes up the majority of RNA in a cell. Like all nucleic acids, it helps in the cell's protein synthesis. Facts about rRNA include:

rRNA is just one of the vital nucleic acids found in a cell. Healthy protein synthesis and DNA transcription can't occur without these acids working together.

While nucleic acids can do so much good for the body, mutation can result in debilitating or life-threatening diseases. There is a long list of genetic conditions caused by nucleic acid mutations, including:

These mutations are passed down from a parent who either has the disorder or carries the gene. As geneticists learn more about how genes work, treatments and cures for these disorders become more and more possible.

The ABCs (or ATCGUs) of Genetics

Now you have seen what nucleic acids are and how they affect your body. Understanding how they work together and within a cell can tell us a lot about the genesis and diversity of life on our planet. For more information on genetics, take a look at these examples of genotypes and phenotypes in various organisms. You can also check out how homozygous genetics appear in living things.