An oath is a solemn promise about your behavior or your actions. In some cases, you can get into serious trouble for taking an oath and then going back on your word or not living up to your promise. Often, when you take an oath, the promise invokes a divine being. For example, you might swear to God that something is true or swear on the Bible that something is true. Deepen your understanding by reviewing some oath examples. 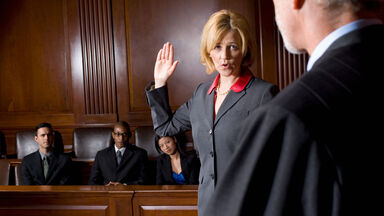 What Is an Oath?

Taking an oath involves making a solemn promise before an institutional authority or in a manner that invokes a divine being. It is more than just making a promise to yourself or to another person. A person is expected to comply with any oath they take regarding their future behavior. Oath-taking should be taken seriously. Depending on the nature of the oath, there may be significant penalties for failing to live up to or otherwise violating what was said in the oath.

Medical students traditionally take an oath before becoming doctors, during the traditional white coat ceremony. Most medical schools no longer require the Hippocratic Oath, instead, they allow students to select or even create their own oath that reflects the realities of modern medicine. The excerpt below is from the oath taken by the class of 2024 at New York Medical College.

"I take this oath with the goal of becoming the best physician I can be. I pledge to remain humble, open-minded and to honor the legacy of the physicians who have come before me by paying it forward in the same scholarly tradition. I recognize my duty to adapt to the dynamic landscape of medicine and to the tremendous growth in biotechnology. I pledge to help each individual entrusted to my care to the best of my ability, in line with the founding principles of New York Medical College. I recognize that my treatment of patients should not only reflect scientific knowledge, but also the art of empathetic care ..."

Even though the words of the original Hippocratic Oath, which was written more than 2,000 ago is no longer a standard oath for medical doctors, it was emphasized for many years. It's certainly worth reviewing an excerpt from this document when considering examples of oaths.

"I swear to fulfill, to the best of my ability and judgment, this covenant: I will respect the hard-won scientific gains of those physicians in whose steps I walk, and gladly share such knowledge as is mine with those who are to follow. I will apply, for the benefit of the sick, all measures [that] are required, avoiding those twin traps of overtreatment and therapeutic nihilism. I will remember that there is art to medicine as well as science, and that warmth, sympathy, and understanding may outweigh the surgeon's knife or the chemist's drug. I will not be ashamed to say "I know not," nor will I fail to call in my colleagues when the skills of another are needed for a patient's recovery. I will respect the privacy of my patients, for their problems are not disclosed to me that the world may know. Most especially must I tread with care in matters of life and death. If it is given me to save a life, all thanks. But it may also be within my power to take a life; this awesome responsibility must be faced with great humbleness and awareness of my own frailty. Above all, I must not play at God."

Before a new President of the United States of America takes office, the individual elected by the American people must take the presidential oath of office, as prescribed in the Constitution. This is done during the inauguration ceremony, which takes place on the 20th of January of the year immediately following an election. In the event the vice president would have to assume the role of the president, he or she would take the oath prior to assuming the duties.

Tradition dictates that presidents add "So Help Me God," after saying the Oath, but this is not in the official text.

Upon making a decision to enlist in the United States military, recruits are required to take the oath of enlistment. This must be done before a new recruit begins Basic Training for military service specific to whichever branch he or she is enrolling.

The oath of military enlistment is an example of an oath of loyalty to your country. A person who violates this kind of oath can be tried for treason.

Oath to Testify in Court

Witnesses who testify in court must take an oath before answering questions. Because they are required to take an oath, the information they share is considered to be sworn testimony. The exact wording may vary, but this type of oath basically involves an officer of the court asking the witness to answer a question about his or her intentions.

"Do you swear to tell the truth, the whole truth and nothing but the truth so help you God?"

Once someone answers "yes" to the above question (or similar), the individual is considered to be under oath. If someone testifies in court under oath and then lies on the stand, the individual can be tried for, and convicted of, perjury.

Oaths are taken all the time, in both professional and personal capacities. The oath examples listed above are just a few of the many types of oaths a person might take. Discover a few more examples of oath-taking:

Standards for Personal or Professional Behavior

In situations where a person would be expected to take an oath, there are often additional expectations for how the individual should behave in regards to related matters. For more information on standards for behavior take the time to learn about codes of ethics for personal and professional behavior. From there, explore some basic code of conduct examples.