When an event occurs, it's natural to wonder how it happened. Occam's razor indicates that the simplest explanation — that is, the solution that requires the fewest assumptions — is preferable. Take a look at these examples of Occam's razor to learn more about the principle in different contexts. 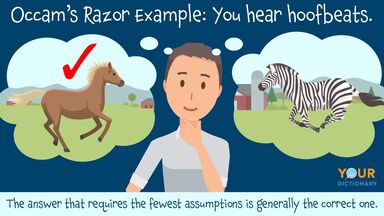 Occam's razor is also known as the law of economy or the law of parsimony (frugality). The "razor" refers to the "shaving away" of extraneous material and assumptions. The idiom "when you hear hoofbeats think horses, not zebras" refers to this principle that the most likely solution is the simplest one. This is not because simpler explanations are usually correct, but because you make fewer assumptions when looking for horses instead of zebras.

Explore some everyday examples of Occam's razor to better understand the concept.

Your car tire is flat when you're getting ready to leave. You consider the explanations:

Unless you have an enemy who is prone to tire slashing, it's more likely that you picked up a nail in your tire. You're making more assumptions for the tire slashing explanation. Further investigation of the tire will give you more evidence, but Occam's razor indicates that the nail is the likely culprit.

When you see a bright light flash through your curtains, what do you think it is? These possibilities may come to mind:

You're jumping to a lot of conclusions if you assume the light was a UFO. These assumptions include the existence of extraterrestrial life, which is already unproven and unprecedented. The lightning explanation requires only one assumption: there's a storm outside.

You failed an important test and want to know why. Some explanations include:

Like most conspiracy theories, the sabotage theory only works with a lot of assumptions. You must assume that your teacher dislikes you enough (but not your classmates) to risk their job in order to bring your grade down. Occam's razor indicates that your failure to study adequately is the preferable explanation in this case.

You walk outside to see a broken fence post outside your house. Two explanations come to mind:

Both solutions seem equally likely. That's where the need for evidence and context comes in. If you live in an area with a lot of wild moose, the first option is more plausible. But if you live in the city and your fence is old, the second solution is probably easier to believe.

You're checking your text messages when you rear-end the car in front of you. Which is the likely reason?

No one wants to be blamed for a car accident. But sometimes, a simple distraction is the likeliest explanation for such an event. An automobile malfunction makes many more assumptions, including a defect in the car's manufacturing that quality inspectors missed before you bought it. The phone in your hand is more likely to have caused the accident.

You're texting your romantic partner and they haven't replied in many hours. You consider these possible reasons:

Having a virtual conversation requires some amount of assumption since you don't know exactly what's happening on the other end. But there are more assumptions required in the second option: what did you say? How was it offensive? Why wouldn't they just talk to you about it? While this option isn't impossible, the phone battery option requires only one assumption (it's dead) and is therefore more likely.

You come home to trash strewn everywhere in your house. When you wonder what happened, you consider:

If you have a dog, it doesn't take much effort to assume that the dog went digging in your trash can. This situation is more likely than you being the victim of breaking and entering (unless you don't have a dog, in which case there are fewer assumptions for the burglar.)

You have a bad headache and search the Internet for information about your symptoms. It comes up with two explanations:

We've all been in a situation where our ordinary symptoms seem more ominous than they are. Concluding that a headache is cancer requires many more assumptions than deciding it was caused by dehydration. Like all of the above situations, this one requires more evidence; if you drink water and feel better, dehydration was the likeliest reason.

The History of Occam's Razor

Fourteenth-century Franciscan friar William of Ockham gave the world a rule: Non sunt multiplicanda entia sine necessitate, or “entities must not be multiplied without necessity.” In other words, the simplest answer — that is, the answer that requires the fewest assumptions — is generally the correct one.

Ockham was not the first to discover this principle. It has been referenced as far back as Aristotle, who wrote "the more limited, if adequate, is always preferable." Ptolomy also used the principle to guide his explanations: "it is a good principle to explain phenomena by the simplest hypothesis available." Occam's razor was first attributed to Ockham in 1852 by philosopher Sir William Hamilton as he referenced the works of Ockham.

Occam's razor makes no absolute assertions. It does not claim that the simplest answer is always correct. It merely suggests that, among all possible answers to a question, the best bet is generally the one that requires the fewest assumptions.

The Argument Against Occam's Razor

Occam's razor is a very helpful heuristic tool for deciding between theories. However, relying on a simplified version of Occam's razor could potentially lead to oversimplifying a situation.

For example, if a doctor is examining a patient with a high fever and cough, they may settle on the simplest explanation: the patient has a cold. But without examining all the evidence, the doctor may miss other symptoms that reveal possible infections, allergic reactions or other life-threatening conditions.

Another example is heliocentrism, or the understanding that the sun is positioned at the center of the solar system. Astronomers Nicolaus Copernicus and Galileo Galilei had very difficult times convincing their Renaissance contemporaries that the Earth was not actually the center of the universe. It was much easier to believe that the sun revolved around the Earth and seemed to require fewer assumptions. However, with more evidence, the more complex heliocentric model is the correct one.

Occam's razor is a good rule of thumb if you remember that it depends on making fewer assumptions based on as much evidence as possible. The doctor made several assumptions about the patient's supposed cold without examining all the evidence. Jumping to conclusions is not the same as relying on an explanation that makes the fewest assumptions.

Occam’s razor is a vital tool in rigorous thought. By reducing the number of unsupported assumptions in an explanation, you reduce the likelihood of being wrong. That’s as true now as it was in the 14th century. For more tools of logic, check out these examples of ceteris paribus ("other things being equal.") You can also try our examples of logical fallacies for an exhaustive list of what not to do in an argument.