Sea vs. Ocean: Which Are You Referring To?

Estimates suggest Earth is covered in about 71% water. That includes lakes, rivers and tributaries all over the world, but two of the most prominent bodies of water are oceans and seas. While ocean and sea are used interchangeably, it turns out they’re different things. 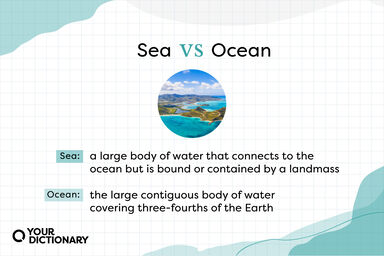 Seas and Oceans Differ By Size

Seas and oceans are both large bodies of water, but their most obvious difference is their size. Oceans are larger, by both area and depth, than seas.

Area is measured in square miles or square kilometers. Oceans will always be larger than seas. The Pacific Ocean is the largest ocean in the world, covering over 30% of the Earth and possessing a surface area of over 60 million square miles. Compare that to the South China Sea, which covers about 1.4 million square miles.

Oceans are also generally deeper than seas. Much of the ocean has not been explored, but the deepest known part of the ocean is the Mariana Trench with a depth of about 36,000 feet. The Caribbean Sea is the deepest sea, measuring about 25,217 feet deep.

Sea: Bound By a Landmass

Seas are large bodies of water that connect to the ocean but are bound or contained by a landmass. Some seas are completely surrounded by land, but they are large enough to be considered seas instead of lakes.

Seas are still composed of saltwater, but they are geographically smaller than oceans.

There are many more seas of the world — around 90 depending on how strict you are on the definition of a sea. Here are 10 of the largest seas in the world:

So, What Are the Seven Seas?

Throughout history, the Seven Seas have been referenced in Hindu, Chinese, Persian, Roman and other texts. Typically, the Seven Seas referred to bodies of water that paved the way for trade routes or simply represented exotic or foreign entities.

The ocean comprises the vast body of water that covers about three-fourths of the Earth. This is known as the World Ocean, which is then divided into five oceans.

While the scientific definition only provides for the single World Ocean, geographers tend to divide it into five separate oceans.

Here they are, in size order, from largest to smallest:

You’d be forgiven for referring to the ocean as the sea, or vice versa. Even cartographers and explorers throughout history seem to have used them interchangeably, but if you’re looking at careers in maritime or piracy, it’s worth knowing the difference.