An omnivore animal is one that eats both plants and animals, which may include eggs, insects, fungi, meat, and algae. Many omnivores evolved to their current state after several years and are opportunistic feeders. They rely on both vegetation and animal protein to remain healthy. Let's enjoy some (occasionally surprising) examples of omnivores. 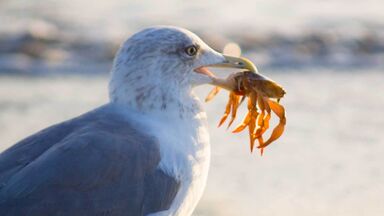 Omnivorous Birds Around the Globe

When you consider birds, you might only think of them as being herbivorous, or eating plants and seeds. However, many birds are omnivores. Let's take a look at these birds and their diets.

Aquatic Birds That Are Omnivores

Mammals That Are Omnivores

Now, we have a class of omnivores that should come as no surprise. Everybody runs when they see a bear because we know they love meat in addition to berries. Explore a few different omnivore animals.

The thing that distinguishes primates from other mammals is their claws. While other mammals have nails, claws, or hooves, primates only have flat nails and opposable thumbs. Humans and monkeys are part of this category. Explore what some of these famous omnivores like to eat.

Here are omnivores that belong to other branches of the animal kingdom, including insects, fish and reptiles.

Another way to approach the study of omnivores is to consider their location. Let's take a look at omnivores from the rainforest's lush terrain to dry and dusty desert plains.

Omnivores in the Amazon Rainforest

The Amazon rainforest is nature's treasure trove. Here are some of the omnivores inhabiting this beautiful land that like a variety of plants and animals.

Omnivores in the Desert

You'd think it might be tough to live in the desert. Alas, if your diet is open to both plants and other animals, the options abound. See what these desert omnivores survive on.

Omnivores in the Ocean

Ocean-dwellers don't live off coral or seaweed alone. Here are some examples of plant and meat-eaters living beneath the ocean blue.

Dinosaurs Believed to Have Been Omnivores

Here are some dinosaurs that science suspects were omnivores:

You Are an Omnivore

Most of us enjoy a diet consisting of plants and meat. Whatever your preference, you're in good company when it comes to our friends in nature. One thing we don't share in common with our friends in nature is carbohydrates. Have you ever seen a badger eating a bowl of pasta? In truth, we could borrow from our primate friends by steering clear of an abundance of simple carbs. Instead, a diet that mixes in some of these complex carbohydrates will keep us healthily atop the food chain.