Examples of Onomatopoeia for Kids

Onomatopoeia is when a word describes a sound and actually mimics the sound of the object or action it refers to when it is spoken. Onomatopoeia appeals to the sense of hearing, and writers use it to bring a story or poem to life in the reader's head. Explore a list of over 180 onomatopoeia words for kids to enjoy. 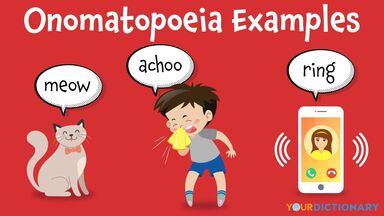 There are many onomatopoeia examples for kids that are not only fun to say but make the concept clear and easier to understand. The following words describe the sounds that are made by various animals. These range from the many different variations of a dog's bark to a distinctive bird's warble. Animal sounds are one of the most common forms of onomatopoeia

The following are examples of words to describe sounds often made by people. These bring to life what a sneeze sounds like (achoo) or how cute children sound when laughing (giggle).

The following onomatopoeia words are sounds you may hear as you go about your day, ranging from the sound of your alarm clock blaring to a stack of books clattering to the floor. Have a bit of fun with these onomatopoeia examples for things.

Looking for a great infographic to help to demonstrate this literary device to kids? You can print out this fun infographic for your classroom or home to hang as a fun reference tool for kids.

Onomatopoeia in Poetry and Literature

One way for children to understand onomatopoeia is to look at examples found in poems and stories so you can really see it in action. It is most common in nursery rhymes, poetry and songs where there are few words to get an idea or feeling across. Take a look at these kid-friendly poems and nursery rhymes.

You can hear the clippetty clop of the horses in this nursery rhyme.

On the Ning Nang Nong by Spike Milligan

Explore all the noisy places in this unique poem by Spike Milligan.

The Fourth by Shel Silverstein

As you can see, there are endless examples of onomatopoeia for kids and how it can be used. We hope the various examples here make it easy to understand onomatopoeia as one of the most fun parts of the English language. Think about how often you use onomatopoeia in your own conversations. You might be surprised at how common it is to use onomatopoeia in everyday life, as well as in writing.

To learn about common sound categories and letter combinations of onomatopoeia, check out some more examples of onomatopoeia and onomatopoeia in nature. You might also want to explore some other literary terms kids should know about.