Examples of Onomatopoeia in Nature

An onomatopoeia is a word that mimics the sound it names. For example, "The acorn plopped into the puddle." Typically, we associate plopping with raindrops. In this instance, we're using onomatopoeia to show the acorn is imitating that sound. Explore onomatopoeia sentences for things found in nature. 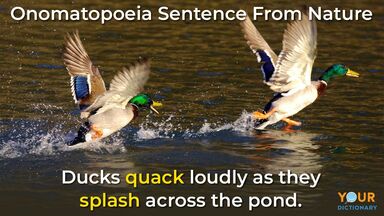 Since nature is full of color, sound and wonder, it's a common go-to when writers and poets want to paint imagery into their writing. Without further ado, let's enjoy some examples of onomatopoeia in nature that you can use to make your writing more expressive and imaginative. Explore different sounds found in nature through these onomatopoeia sentences.

While there are distinct animal sounds you’ll hear in the wild, you’ll also find some familiar sounds on farms. Explore these onomatopoeia examples sentences.