Examples of Oration From Great Orators

Great orators can start revolutions, stir up emotions and spur people to action. Memorable oration can often be found in formal speeches given at momentous occasions, such as graduations, rallies, dedications, and presidential inaugurations. See great oration at its finest through these examples of oration speeches. 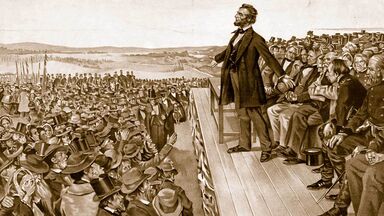 Oration might seem like a weird word. However, it's easy to remember what oration is if you think of the word oral. In simplest terms, oration is an oral speech given by someone in front of an audience. The word oration comes from the Latin word oratio, which means speech, and orare, which means to plead, speak or pray. It is a speech that is usually elaborate and dignified.

Throughout history, some of the greatest orators presented speeches that are impactful and brimming with emotion, like Gandhi's "I Quit India" Speech and John F. Kennedy's inaugural address. Explore other impressive examples of oration by famous orators.

See oration at its finest through the dedication of the Soldiers' National Cemetery in Gettysburg, Pennsylvania, on November 19, 1863, by Abraham Lincoln.

"Four score and seven years ago our fathers brought forth, upon this continent, a new nation, conceived in liberty and dedicated to the proposition that "all men are created equal."

Now we are engaged in a great civil war, testing whether that nation, or any nation so conceived and so dedicated, can long endure. We are met on a great battlefield of that war. We have come to dedicate a portion of it, as a final resting place for those who died here, that the nation might live. This we may, in all propriety do. But in a larger sense, we cannot dedicate, we cannot consecrate, we cannot hallow, this ground. The brave men, living and dead, who struggled here, have hallowed it, far above our poor power to add or detract. The world will little note, nor long remember what we say here; while it can never forget what they did here."

Martin Luther King's I Have a Dream Speech

Given in August of 1963 at the Lincoln Memorial, Martin Luther King's speech is one of the best examples of oration.

"And so even though we face the difficulties of today and tomorrow, I still have a dream. It is a dream deeply rooted in the American dream.

I have a dream that one day this nation will rise up and live out the true meaning of its creed: 'We hold these truths to be self-evident, that all men are created equal.'

In 2004, Barack Obama gave a speech at the Democratic National Convention that moved him to the forefront of people's minds for the election.

"That is the true genius of America, a faith ... a faith in simple dreams, an insistence on small miracles; that we can tuck in our children at night and know that they are fed and clothed and safe from harm; that we can say what we think, write what we think, without hearing a sudden knock on the door; that we can have an idea and start our own business without paying a bribe; that we can participate in the political process without fear of retribution; and that our votes will be counted — or at least, most of the time."

Bill Clinton's I Have Sinned Speech

In 1998, Bill Clinton gave one of his most famous speeches at the annual White House prayer breakfast.

"This is always an important day for our country, for the reasons that the vice president said. It is an unusual and, I think, unusually important day today. I may not be quite as easy with my words today as I have been in years past, and I was up rather late last night thinking about and praying about what I ought to say today. And rather unusual for me, I actually tried to write it down. So if you will forgive me, I will do my best to say what it is I want to say to you — and I may have to take my glasses out to read my own writing."

Winston Churchhill's We Shall Fight on the Beaches Speech

In June 1940, Winston Churchill gave a famous World War speech that still resonates to this day in his "We Shall Fight on the Beaches" speech.

Margaret Thatcher's The Lady Not for Turning Speech

At the Conservative Party Conference in 1980, Margaret Thatcher gave an inspiring oration speech that is still analyzed to this day.

"To those waiting with bated breath for that favourite media catchphrase, the 'U' turn, I have only one thing to say. 'You turn if you want to. The lady's not for turning.' I say that not only to you but to our friends overseas and also to those who are not our friends.
In foreign affairs we have pursued our national interest robustly while remaining alive to the needs and interests of others. We have acted where our predecessors dithered and here I pay tribute to Lord Carrington. When I think of our much-travelled Foreign Secretary I am reminded of the advert, you know the one I mean, about 'The peer that reaches those foreign parts that other peers cannot reach.'”

In 1998, Tony Blair made history through his famous Irish Parliament speech as British Prime Minister.

"The peace process is at a difficult juncture. Progress is being made, but slowly. There is an impasse over the establishment of the executive; there is an impasse over decommissioning. But I have been optimistic the whole way through. And I am optimistic now. Let us not underestimate how far we have come; and let us agree that we have come too far to go back now.
Politics is replacing violence as the way people do business. The Good Friday Agreement, overwhelmingly endorsed by the people on both sides of the Border, holds out the prospect of a peaceful long-term future for Northern Ireland, and the whole island of Ireland."

Oration isn't something that is new. In fact, examples of oration go back to the ancient Greek civilization. Plato and Aristotle were well-known orators, and the art of public speaking was taught for use in court, politics or any time the need arose.

The Romans took this skill and added to its instruction the study of grammar and how to prepare speeches, as well as studies in the humanities. They added humor to the speeches, and it evolved into a form of entertainment with skilled orators making a good living. And the skill of oration has made a huge impact on history. In fact, Adolf Hitler urged Germany and the Nazis into World War II while Charles de Gaulle inspired France to fight against the Nazis.

The Art of Oration

As you can see, many great orators make an impact on a nation and sometimes the world. However, not all oration is done by great orators. See examples of short oratorical speeches too.