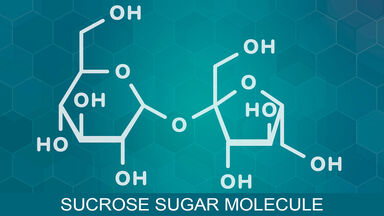 Many organic compounds are carbohydrates. The chemical formula for carbohydrate is (CH2O)n. In this formula, “n” represents the number of carbon atoms in the molecule. There are three categories of carbohydrates: monosaccharides, disaccharides and polysaccharides.

Carbohydrates in the monosaccharides category are simple sugars. Many, but not all, have the molecular formula (C6H12O6).

Disaccharides are pairs of monosaccharides, meaning they are two simple sugars. These examples are formed by joining together two monosaccharides with a chemical formula of (C6H12O6), so they have the same molecular formula (C₁₂H₂₂O₁₁).

Polysaccharides are a group of carbohydrates that contain multiple monosaccharides. They can be monomers (single molecules) or polymers (multiple molecules that have bonded together) of sugars. Starches are included in this category.

A lipid is a fatty or waxy organic compound. They are predominantly made up of hydrocarbons. There are dozens of lipids, many with extremely complicated molecular formulas.

Proteins are extremely complex. All organs and tissues contain proteins, which are molecules with polymers of amino acids held together with peptide bonds. Proteins are made up of amino acids. In addition to carbon and hydrogen, they also contain nitrogen and oxygen.

Nucleotides are organic compounds that contain a nitrogen base, ribose or deoxyribose (monosaccharides that have five carbon atoms), at least one phosphate group, and hydrogen. All but one of the nucleotides are nucleic acids. Adenosine triphosphate is also a nucleotide.

Adenosine triphosphate (C10H16N5O13P3), commonly referred to by the acronym ATP, is where the energy used and stored by cells comes from. The phosphates in ATP store potential energy, so it is described as a “high energy” organic compound.

These are a few examples of the many, many organic compounds that exist. These compounds are at the heart of organic chemistry, which is “the study of the structure, properties, composition, reactions, and preparation of carbon-containing compounds.” They play a role in every aspect of life. There are millions and millions of known organic compounds, and probably more that have yet to be discovered or identified.

Whether you’re a student taking a general chemistry class or one focused specifically on organic chemistry, chances are that you need to be able to list or identify at least some organic compounds. Now that you have reviewed what an organic compound is, some examples of organic compounds in different categories, and their chemical formulas, it’s a great time to expand your chemistry knowledge in other ways.

Start by exploring 20 common examples of bases in everyday life. If that isn’t quite challenging enough, explore some examples of catalysts. The more you learn now, the better prepared you’ll be for your next chemistry class, or even a professional career working as a chemist or in another science-related occupation.