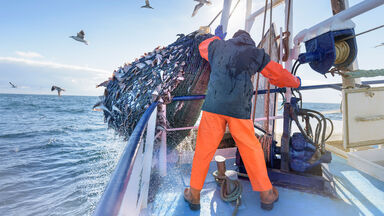 The cause of overfishing is largely due to the number of commercial fishing fleets and the methods of fishing that make it impossible for the ocean to sustain the existence of fish in these fishing areas. As a result of commercial overfishing, some species are extinct or approaching extinction. Discover a few real-world examples of overfishing.

Overfishing Due to Bycatch

Some overfishing occurs as a result of bycatch, which is when fishers seeking to lure certain types of fish end up also trapping and capturing other species incidentally.

The previous overfishing of herring resulted in ill effects on cod because herring are cod's primary prey. In the U.S., as of 2020, herring are no longer considered subject to overfishing due to U.S. regulations that now require sustainable harvesting and population management. This indicates that an important key to solving the problem of overfishing is to stop poor fishing practices and to better monitor exploited populations of fish.

Individuals can help by remaining informed on overfishing and supporting sustainable practices, namely by purchasing fish that have been sourced in a sustainable fashion. When purchasing fish, look for inventory sourced via a fishery that carries the Marine Stewardship Council (MSC) seal. This indicates that the fishing company focuses on sustainable fishing practices and effective fisheries management, along with proactively taking steps to minimize their environmental impact.

Overfishing is a "tragedy of the commons" problem. It is better for each individual person to overfish to benefit himself, but it would be better for all the fisherman collectively if everyone refrained from overfishing to sustain the population. Those who refuse to follow catch and size limits, which exist specifically to help combat overfishing, are causing problems that will ultimately have a negative impact on their own livelihood or recreation, as well as everyone else's, to the detriment of wildlife and the overall environment.

Now that you have reviewed some overfishing examples, spend some time exploring natural ecosystems in biology. From there, learn about keystone species and what happens when they are removed from a habitat.