Examples of Paradox in Life and Literature

A paradox is a statement that may seem contradictory but can be true (or at least make sense). This makes them stand out and play an important role in literature and everyday life. Beyond that, they can simply be entertaining brain teasers. 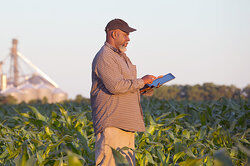 Man standing in field using iPad as examples of paradox

Take the statement "Less is more." This statement uses two opposites to contradict one another. How can less be more? The concept is that something less complicated is often more appreciated. Let's talk a little bit more about this rhetorical device and enjoy a handful of examples of paradox.

Ready to flex your mental muscles? Some of these statements may make you pause and think. Here are some thought-provoking paradox examples:

A paradox can be thought-provoking but they're also fun to consider. Here are some paradoxes with a witty bent:

Let's continue to some larger examples of paradox that appear in works of literature. Examining their purpose will become an important part of the process.

In George Orwell's Animal Farm, "All animals are equal, but some are more equal than others" is one of the cardinal rules. Clearly this statement does not make logical sense. However, the point of a paradox is to point out a truth, even if the statements contradict each other.

Orwell is making a political statement here, but what? Perhaps it's that the government claims everyone is equal when, clearly, that's false. Or, perhaps it's that individuals have skewed perceptions of what it means to be equal. The interpretation is up to the reader to decide.

Poet John Donne wrote, "Death, thou shalt die," in "Holy Sonnet 11." That's sort of contradictory, isn't it? How can death die? Well, this is the beauty of the paradox.

On the surface, this seems like a grim line. Quite the contrary, though. What Donne is really saying is that, upon death, heaven is imminent. And, in heaven, death shall die, because you are no longer at the mercy of your inevitable demise. When you remove the morbid veneer, this is actually a statement of hope.

In William Shakespeare's Hamlet, the title character states, "I must be cruel to be kind." On the surface, once again, this statement doesn't seem to make much sense. How can an individual convey kindness through cruelty?

In this case, Hamlet is speaking about how he plans to slay Claudius in order to avenge his father's death. His mother is now married to Claudius, so, of course, this will be a tragedy for her. However, he does not want his mother to be the lover of his father's murderer (unbeknownst to her) any longer. He believes the murder will be for her own good.

It's common to confuse a paradox with an oxymoron. Both are found in literature and everyday conversation. Here's the difference between the two:

Oxymorons are often referred to as a "contradiction in terms." They're just that. A word or two that bounce off each other. Paradoxes, however, are entire phrases, sentences or quotes. In truth, both achieve the same result. Examples of oxymorons include bittersweet, jumbo shrimp, only choice, and sweet sorrow.

Paradoxes have important implications in the world of literature. They take aim at the overall theme. Take George Orwell, for example. Animal Farm was all about class distinctions and inequalities. With one paradoxical line, he highlighted what was true for him. To make sure your next paradox aligns with the theme of your story, take a look at these Examples of Theme in Literature.