Examples of Parasitism in Humans and Nature

You might think of a parasite as a flea. However, that is just one type of parasite. Learn the types of parasitism through parasitism examples. Get several examples of parasitic relationships found in humans, oceans and plants. 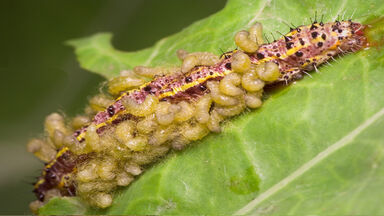 You’ve probably seen a flea or a tick on a dog. Did you know those were examples of parasites? A parasitic relationship or parasitism is a relationship between a parasite and a host that's beneficial to the parasite and detrimental to the host. A parasite lives on or inside of a host and causes harm to the host, sometimes even death. Since a flea is a parasite, you might guess that the dog is the host.

While there are many kinds of parasites, all fit into one of two fundamental types of parasite:

Many times these parasites are either single-celled protozoa or helminths, which are worm parasites.

Among parasites, you can find several different types of parasitism, from the parasite being totally dependent on the host to free living. See a few of the important types.

Humans have a lot of parasites that can be found inside and outside of their bodies. While most parasites aren't looking to kill their host (because they need them to survive), they can cause serious issues.

Also known as Fasciola hepatica, this parasite does exactly what its name suggests; it latches onto your liver. Actually, it's more a fan of sheep and cattle, but humans will do in a pinch. This parasite feeds on tissue and bile, but it's fairly easily treated.

With the scientific name of Naegleria fowleri and the common name of brain-eating amoeba, these amoebas are bad news. Most commonly contracted in unsterilized water, N. fowleri causes severe inflammation of the brain and its surrounding membrane.

You may have heard that mosquitoes cause malaria. That isn't technically true. It's caused by five species of Plasmodium microorganisms, which mosquitoes pick up when feeding on infected blood and subsequently spread around to other victims. These protozoa lead to a flu-like illness in humans and even death.

This usually microscopic flatworm, Schistosoma, is about as bad as pathogens get. Schistosomiasis, contracted from freshwater infected with the worms, causes abdominal pain and swelling, bloody urine and feces, and over time potentially liver and kidney failure.

The parasitic roundworm Trichinella infests the intestines and causes the logically named trichinosis, which leads to cramps, difficulty digesting and other unpleasant things. You can get this parasite from eating raw or undercooked meat.

Trypanosoma brucei is a protozoan that causes an infection of the brain that makes people sleep all the time. Much like malaria, this is an insect-borne invention where tsetse flies transmit the disease to humans.

Thirty years ago, it seemed bedbugs (Cimex lectularius and Cimex hemipterus) were a solved problem. But life finds a way. In the past few decades, bedbugs have made a spectacular comeback. These near-invisible insects feed on human blood through a sharp proboscis they sink into any exposed skin.

You've probably got these. Happily, you should go your whole life without noticing. Demodex folliculorum and Demodex brevis are way less harmful than most of the other parasites. They usually cause no symptoms at all. At worst, people with compromised immune systems or sensitive skin might get a rash when the mites bite.

Pediculus is actually two almost identical species of louse that live on the human body. P. humanus capitis is the human head louse (the bane of school administrators, schoolkids and parents the world over). P. humanus humanus is its rarer cousin, the body louse. Both cause infuriating itching and can spread nasty diseases like typhus.

Meet the human flea, Pulex irritans. On their own, they're just itchy, but they become a whole new problem when there's a disease going around. P. irritans is infamous as the human vector for the Black Death, the dreaded bubonic plague that hopped from rats to humans and back again.

The nasty little mite Sarcoptes scabiei causes scabies, an intensely itchy and unpleasant skin disease. The S. scabiei mite travels through skin-to-skin contact, and it only takes 10 or 15 of them to start a full-scale infection.

While leeches (Hirudinea) can parasitize humans, they rely more on other animals to complete their life cycle. Freshwater fish, invertebrates like slugs and snails, and vertebrates from mice to bears are all popular dining choices for leeches.

Ichneumonoidea are parasitic stinging insects. Ordinarily solitary predators, when a female hawk wasp is ready to lay eggs, it parasitizes a spider, stinging and paralyzing it with venom, then laying eggs in its body. Baby wasps then hatch and eat the still-living spider alive.

Examples of Parasites Found in the Ocean

The ocean is the biggest ecosystem in the world. Parasites flourish there, taking advantage of the limitless diversity of animals and plants to be found beneath the waves. Explore a few different parasitism examples under the sea.

Cyamidae is not actually a louse, lice are insects, and this is an isopod — a crustacean and oceangoing cousin of the pill bug. It snags onto whales for food and transportation. They feed primarily on algae that collect on the whale's skin but also attack open wounds and damaged tissue. They are so common among right whales that scientists use the patterns of their infestations to tell one whale from another.

Cymothoa exigua, a type of marine crustacean, actually eats and replaces the tongues of fish and other warm-blooded organisms, feeding on the blood that should be flowing to the tongue.

Glochidium doesn't refer to a specific species of mussels. Rather, it refers to a stage in the mussel lifecycle. Before mussels settle down and build shells, they have to find an appropriate place. To that end, they evolve barbed hooks and hijack rides on nearby fish, dropping off when they find a likely spot. By themselves, glochidia are harmless, which makes them commensals rather than parasites. However, mussels often grow in enormous groups, and infestation by multiple glochidia at once can injure or even kill fish.

The Pinnotheres pisum is exactly what it sounds like: a crab the size of a pea. They live inside mollusks, including mussels, oysters, sea urchins, and sand dollars, stealing food and occasionally taking bites of their hosts.

Most barnacles aren't parasitic; they encrust wood, stone and other solid surfaces and filter the water for food. Not so with Sacculina. This particular breed of barnacle attacks crabs, replacing their genitals and causing them to treat Sacculina larvae as they would their own eggs, helping Sacculina to spread and thrive.

Examples of Parasites in Plants

Plants are perfect hosts for parasites. Just to start with, they don't move around much. They're rich in valuable nutrients, and if the parasite is small enough, plants make great shelter too. Hence, it is not surprising that there are all sorts of plant parasites.

Aphids feed on plant sap, usually too much plant sap for the plant's wellbeing they infest. Aphids are tiny and soft-bodied, making them the favored prey of predators like ladybugs, but they have protection too. Ants sometimes farm aphids for their sugary secretions, protecting them while they feed.

Cynipidae are small, non-stinging wasps that cause plants to grow galls. Galls are basically tumors, big balls of useless tissue, on plants. While galls are useless to plants, wasps lay their eggs inside them, providing food and shelter for their developing young.

Santalales is a festive holiday plant that has some unpleasant feeding habits. Mistletoe attaches to a host plant with a special root called a haustorium, which it uses to drain the host of water and nutrients. Mistletoe is not only parasitic; it's also toxic! Mistletoe really wants you to leave it alone.

Parasites may seem unpleasant, but they're a fundamental part of nature. Ecosystems would collapse without the presence of parasites, as populations would grow out of control and predator-prey relationships would change beyond sustainability. We won't tell you to stop swatting mosquitoes, but at the very least, we hope you come away with a deeper understanding of these unique, if unpleasant, organisms. Want to know more? Check out examples of symbiosis for healthier (but just as interesting) relationships between organisms.