Examples of Personification: What It Is and How to Use It

Everyone knows what a person is, but do you know what personification is? Personification is a type of metaphor and a common literary tool. It is when you assign the qualities of a person to something that isn't human or that isn't even alive, such as nature or household items. Explore these personification examples to see how well you understand the concept. 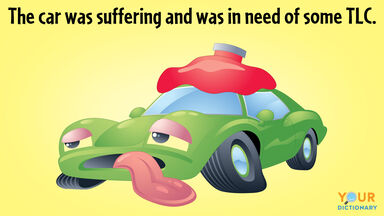 Personification is a literary technique writers use to add human qualities to non-human things. It helps the reader relate to and create a picture in their mind when stars dance or opportunities knock. Explore a few famous examples of personification in literature.

Two Sunflowers Move Into the Yellow Room by Nancy Willard

In this poem, the sunflowers are talking to the famous poet William Blake. They are tired of being outside and tell him that they want to be moved. We know that sunflowers cannot be tired or talk, so Willard uses personification to give them these attributes.

"'Ah, William, we're weary of weather,’
said the sunflowers, shining with dew.
‘Our traveling habits have tired us.
Can you give us a room with a view?’

They arranged themselves at the window
and counted the steps of the sun,
and they both took root in the carpet
where the topaz tortoises run.”

William Wordsworth's poem brings the beauty and tranquility of nature to life. The daffodils are personified as a crowd of people dancing, while Wordsworth floats like a cloud enjoying the show.

"I wandered lonely as a cloud
that floats on high o'er vales and hills,
When all at once I saw a crowd,
A host, of golden daffodils;
Beside the lake, beneath the trees,
Fluttering and dancing in the breeze.

Continuous as the stars that shine
And twinkle on the milky way,
They stretched in never-ending line
Along the margin of a bay:
Ten thousand saw I at a glance,
Tossing their heads in sprightly dance.”

"The grey-ey'd morn smiles on the frowning night,
Chequering the eastern clouds with streaks of light."

In the poem "Paul Revere's Ride," Longfellow uses personification to describe the flow of the wind. The way he words the passage makes it easy to see the wind swirling past the tents. Check out an excerpt of this poem.

"Beneath, in the churchyard, lay the dead,
In their night-encampment on the hill,
Wrapped in silence so deep and still
That he could hear, like a sentinel’s tread,
The watchful night-wind, as it went
Creeping along from tent to tent,
And seeming to whisper, “All is well!”
A moment only he feels the spell
Of the place and the hour, and the secret dread
Of the lonely belfry and the dead;
For suddenly all his thoughts are bent
On a shadowy something far away,
Where the river widens to meet the bay,—
A line of black, that bends and floats
On the rising tide, like a bridge of boats."

Famous poet and author Shel Silverstein uses personification to show how doubts can crawl into your mind. This effective literary device creates a beautiful image in your mind of the doubts filling this child.

Ways to Use Personification

Personification is all about giving your writing more pop! For example, rather than saying, "The stars twinkled in the sky," you can say, "The stars danced playfully in the moonlit sky." The second sentence adds an illustrative effect to the sentence. In your mind, you can see the twinkling stars dancing in the moonlight. Explore a few examples of how personification adds to the sentence meaning.

Do you think that you understand what personification is? Then you might want to try your hand at finding personification in a sentence. Remember, it gives human behaviors and gestures to nonhuman things or ideas.

The subject of the personification and the human characteristic it was assigned are both in bold. How many did you get right?

There is often confusion between personification and anthropomorphism. While they are similar, there is a distinct difference.

As seen by the examples, personification is used to assign human qualities to things that are not human, but it does not make them completely behave like a human. The purpose of this figurative language is to bring inanimate things to life to better explain them. Writers often use personification to make their writing more vivid and to have the reader understand the object or animal in a better way. Keep having fun with this literary device by checking out humorous examples of personification in poetry.