Pluralism refers to a society, system of government, or organization that has different groups that keep their identities while existing with other groups or a more dominant group. Rather than just one group, subgroup or culture dictating how things go, pluralism recognizes a larger number of competing interest groups that share the power. Pluralism serves as a model of democracy, where different groups can voice their opinions and ideas. Expand your knowledge by exploring some pluralist democracy examples, as well as other illustrations of pluralism. 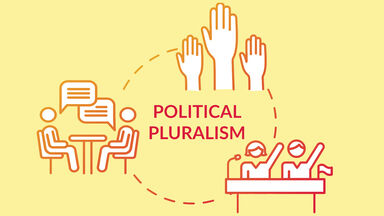 Examples of Pluralism in Real Life

There are many examples of pluralism in everyday life throughout locations and organizations around the world.

Countries that welcome immigrants are often referred to as melting pots where people of different cultural backgrounds have come to live but are able to keep alive their own cultural traditions.

Subcultures in a Pluralistic Society

Not all cultural groups of people in a particular country or other geographic location relocated there from another country. In a pluralistic society, many subcultures exist, each with their own beliefs and practices.

Some countries are theocracies, which means that citizens don’t have freedom of religion. However, in countries where the government isn’t allowed to establish official religions, which is the case with pluralistic democracies, there is not a single, dominant religious belief.

The Legislative Process in a Pluralistic Democracy

Decisions that are made according to the principles of democracy are pluralistic in nature, including passing new laws or amending existing laws. Prior to a law being passed in a country with democracy, various groups have an opportunity to speak up and lobby for their point of view. This is an exercise in pluralism.

Even though there are elected legislators in each state within the United States, for example, there are limits to what they can change without a vote of the people.

Pluralism at Work in Organizations

Pluralism isn’t limited to geographic areas, society as a whole or politics. Some businesses and other organizations have embraced a pluralistic approach to operations. Rather than maintaining an old-school centralized structure, employees or members are consulted and listened to regarding important decisions.