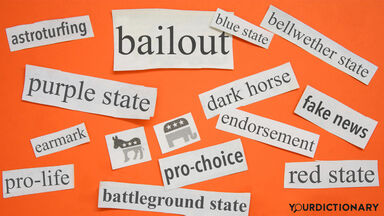 Whenever election season rolls around, you are likely to hear these terms thrown around, but what do they mean?

Whether you are watching the news or interacting on social media, you are likely to hear these terms at some point to refer to politicians, the political process or the news itself.

These are all examples of political slang terms or political speech commonly used by those on the "inside" of politics. So next time you watch the news or head to the voting booth, you can impress your friends with your knowledge of political jargon.

For more political terminology, you can learn more common political terms related to U.S. politics, voting and government. Teachers and parents can see how your kids can get up to date on current events and get involved with local or national issues to learn more.